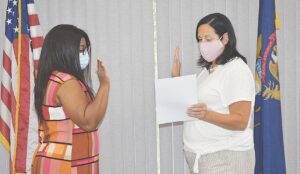 La Cracha Handy (left) received the oath of office at a special meeting held on Tuesday. Photo by Ben Gagnon

FLINT TWP. — The Carman- Ainsworth Board of Education unanimously appointed La Cracha Handy as its newest member at a special meeting held on Tuesday.

Handy, a health unit coordinator at Hurley Medical Center and long-time Flint Township resident, has filled a vacancy created by former Trustee Lonney Jarnigin, who resigned from the school board on Aug. 9. She will fill a partial term that’s set to expire on Dec. 31, 2022.

Earlier this year, Handy applied for a separate vacancy on the school board after former Trustee Todd Miller resigned in July. At that time, the board selected Waymond Beavers to fill the remainder of Miller’s term.

In addition to her position at Hurley, Handy is a substitute paraprofessional in the Carman-Ainsworth district and serves on the Genesee Intermediate School District’s parental advisory committee.

During the interview section of Tuesday’s meeting, Handy said that her top priorities include making sure students receive a quality education in a safe environment, helping the board pass balanced budgets and negotiating successful contracts with the district’s teacher and staff unions. She also said that she wants to see more special education offerings in the district and more community engagement.

“Everyone has different learning abilities, so I just want to make sure that we continue to have classrooms that will cater to all students,” she said. “I’d also like to see more parents and students bring their concerns to the board meetings.”

Handy has lived in the district for 17 years and has two sons: her oldest graduated from Carman-Ainsworth last year, and her youngest is starting his freshman year.

Jason Loewen, a local pastor and recess supervisor at Randels Elementary School, also applied for the board vacancy and was interviewed at Tuesday’s special meeting. As a prospective school board member, he said that he would like to help the district find ways to improve test scores at every grade level and attract more volunteers—particularly at the elementary schools.

After discussion, C-A school board members selected Handy to be Jarnigin’s replacement, saying that they were impressed with her resume and dedication to the district.

“I like the fact that Ms. Handy is on the GISD parental committee,” said C-A School Board Secretary Lisa Koegel. “That shows commitment. She’s also a reader, likes to study and she’s a self-learner. Those are all great traits for a school board member to have.”

Handy, who indicated that she plans to run for reelection after her partial term ends, will have to run in the November 2022 general election to fill the remainder of Jarnigin’s term (Jan 1., 2023, to Dec. 31, 2024) and begin a full six-year term on the school board.