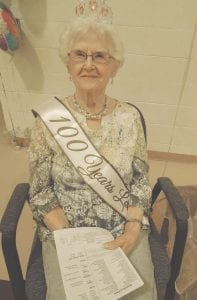 Anna Boyd was the guest of honor at a party put on by members of the United Methodist Church of Swartz Creek, to celebrate her 100th birthday. Photo by Lania Rocha

SWARTZ CREEK — Anna Boyd made her debut in the world Aug. 13, 1918, at home on her family’s 40-acre cotton farm in Beech Grove, Arkansas, a small town outside Paragould.

In honor of her 100th birthday, Boyd was the belle of the ball at a celebration Sunday at the United Methodist Church of Swartz Creek.

Boyd, a former Swartz Creek resident now living in Flint Township, beamed with joy as Sulz positioned a pink and silver tiara on her head.

Boyd grew up with five sisters and four brothers. All but one sister, who will turn 98 in September, have passed. Another sister, who passed away last year, lived to 101.

“Had she lived a few days longer, she would have been 102,” Boyd said.

Boyd attributes her longevity to hard work, mostly; but a positive attitude, close family ties and unwavering faith in the Lord also have helped carry her through.

“I’ve worked hard my whole life,” she said. “Growing up, I picked cotton. It wasn’t fun. We’d go to school for so many months, then we’d get out to chop (weed) cotton. Then we’d go back for a while, then get out to pick cotton.

“We went to church three times a week; that was a must. I played basketball and croquet. We weren’t allowed to go to movies or to dance; dad wouldn’t allow it.

“We didn’t know we were poor because everybody else was poor. But we were all very close.”

It was at the family homestead that Boyd met her husband, Joseph B. Boyd, who worked on the farm. The couple moved to Michigan in 1936.

“We came for the work, like everybody did,” she said.

But the Boyds missed home and, after several years in Flint, they packed up their daughters – Kay (Jordan), then 7, and Rita (Ignace), who was 2 – and headed back down home. They bought a store and settled in, but found that their hearts were still in Michigan.

“You miss where you’re raised,” Boyd said. “But when we left, we missed it here so much.”

A few years later, the Boyds returned to Flint. Joseph found a job at Fisher Body and Anna worked for a while at Turnstedt. They became active in West Flint General Baptist Church, although Anna said she has always been a Methodist.

Those years, along with her childhood, were some of Anna Boyd’s best, she said.

“I don’t know if I’d do anything different, but if I could live my life over, I’d live the part of it when I was a kid and most of it when my girls were growing up,” she said. “They were happy times.”

Anna Boyd’s family now includes seven grandchildren, 31 great-grandchildren and 32 greatgreat grandchildren, according to Ignace. All but two of the family members gathered for a birthday bash last week.

“I never thought much about getting old,” said Boyd. “I never dreamed I’d live this long. I haven’t lived a perfect life, but I’ve always lived the best life I know how.”