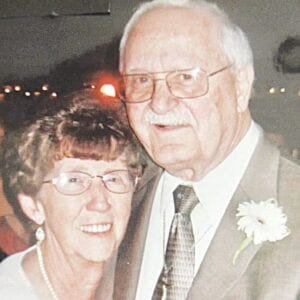 Kenneth and Dorothy (O’Brien) West will celebrate their 70th wedding anniversary surrounded by their family at a picnic on July 12th. Kenneth and Dorothy were married on July 14, 1951, at St. Mary’s Catholic Church in Flint, MI where they met while attending school and church throughout their childhood. They raised their family & lived on the east side of Flint for more than 45 years before moving to Grand Blanc. Kenneth served in the Marine Corps. and is a Chosin Reservoir survivor of The Korean War. After serving in the military, he worked for AC Spark Plug, a division of General Motors, and retired in 1982 after 30 years of service. Dorothy retired from Old Kent Bank after 27 years of service. They have been blessed with eight children (all living in Michigan), 20 grandchildren and 25 great-grandchildren.