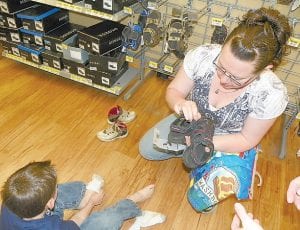 Archer Granger spending some of the $500 gift card he received to buy stuff for his trip to Disney World. His mom helps him try on sandals, the scar on his foot from his injury still noticeable.

FLINT TWP. — That famous victory cry of “I’m going to Disney World’’ is what’s next for Archer Granger, 7, of Metamora , who was recognized as the 2011 Michigan ambassador to the Children’s Miracle Network Hospitals at a special event last week at the Walmart Super Center on Corunna Road.

Archer’s lost some toes on his left foot and his right foot was 95 percent severed in a commercial lawnmower accident in August 2009. He was airlifted to Hurley Medical Center – the only Level 1 Trauma Center north of Detroit – where a hardworking team of 18 doctors pulled off the miracle of reattaching the boy’s foot.

In mid-October, the miracle children all will travel to Washington D.C. for visits with congressional representatives and a hoped-for audience with the president before moving on to Orlando, Florida for the National CMNH Conference where each child will be presented with a champion’s medal just like in the Olympics, Tracy-Stephens said.

Archer also will represent CMNH at many Michigan events in the next year including its annual fundraising telethon June 5, she said.

Archer’s Walmart appearance came with a birthday cake and a surprise $500 gift card for the boy and his family to shop for items they will need for the trip to Washington D.C. and Orlando.

As a long-time supporter of the CMNH, Walmart and Sam’s Club associates, customers and members have raised more than $500 million for children’s hospitals, said Kevin Walicki, Walmart shift manager, who presented the gift card.

“Thank you for making me a miracle,’’ Archer said to the gathering. With gift card in hand, the first words out of Archer’s mouth was Legos. His dad Pete explained that Legos provided therapy for his son during his recovery when he could not leave the house for fear of getting an infection in his open wound. But he bounced back faster than anyone expected.

In his brief remarks, Pete Granger said that as a parent he cannot describe the emotions gripping him after Archer’s accident. But within an hour after the boy arrived at Hurley, “we were confident we were in a great place,’’ he said. “He recovered better than we would have imagined. The miracles that have happened at Hurley and the CMNH have overshadowed the accident.’’

Archer, who attends Murphy Elementary School in Metamora, has even won a jumping rope competition since his accident, his dad said. He likes to ride his bike and do tricks on it, said his mom Jennifer. And “these are his brakes,’’ she said pointing to scuffed toes of Archer’s gym shoes.

The Walmart event brought together Archer and a doctor and nurse who provided care for him during his stay at Hurley.

“We’re all about kids,’’ said Dr. Mahesh Sharman, a Hurley pediatric intensivist, who scooped Archer up into his arms for a reunion hug. Sharman recounted the intensive medical procedures following Archer’s accident.

“Today I see him running faster than other kids around,’’ Sharman said. “Children like Archer get the finest care in the country right here in our own community.”

“One of my children is the same age as Archer,’’ he said “When I look at him, I think of my own child.’’

It’s a happy ending for Archer who is a happy, healthy active boy with a scar across his right foot the only visible sign of his traumatic experience. He still sometimes has night terrors, said his dad Pete, but usually can’t remember them the next morning. And he doesn’t like being around lawnmowers, his mother said.

Archer and his twin sister Delaney who turned 7 on May 6 happily blew out the candles on the balloonshaped birthday cake before diving in. Wide smiles creased identical faces when the gift card was presented.

Both children were up for their shopping spree but their Mom wanted to wait until closer to their trip so they won’t outgrow everything.

She relented enough for Archer to pick out a pair of Sponge Bob swimming trunks, camouflage crocs and a snazzy pinstriped suit and yellow power tie for when he goes to shake hands with all the bigwigs in Washington D.C. his dad said.