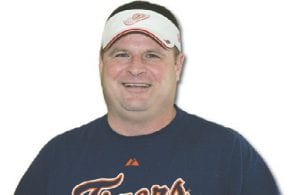 The New Year arrived on Wednesday and I want to wish all of you a happy and prosperous 2014. I hope 2014 is your best ever. Here I am, early Sunday morning, hammering out an article with my fresh cup of coffee. Man, the Fat Guy hates early deadlines.

How about those bums, the Detroit Lions? They needed help to win the NFC North and they get it from the Eagles and Steelers, who took down Chicago and Green Bay, respectively. What does the worst franchise in the NFL do? They lose a home game to the horrendous dead-to-the-world New York Giants. Yes, yet another serious choke job by the world’s best chokers, the Detroit Lions. The Honolulu blue and silver are the correct colors for this football team. Their face turns blue and bluer after every single choke on the field. The Honolulu equals Hawaii where the women wear a lot of grass skirts. The Lions wear skirts instead of uniforms.

Matt Stafford plays like a $54- million quarterback employed on the opposing team’s payroll. Stafford’s girlfriend needs to shut her big-mouth trap, too! Did you all miss her blonde (fake hair) smart comments? Sorry to all you smart blondes out there. She wonders why people are booing her man, then states she doesn’t even know who the home team is the way they are booing! They are booing because this team choked away a playoff spot that was served up on a gold platter. They are booing because your man throws out picked noses at a stop light! They boo because there are decades of frustration sitting in those blue seats. They are booing because people pay good money to watch their “home team” play football. When they suck, they deserve to be booed. One more thing, girlfriend. All those people booing help you and Mr. Color Blind afford anything you want for the rest of your life. I recommend you just shut up and help your man play better next year. Maybe watch some film with him and help stop the booing.

We, as long-time Lions fans, would love to never ever boo inside of Ford Field ever again. That would be my ultimate 2014 New Year’s Day wish. However, until then, it’s same old Lions and the Lions are on the clock.

A season of hope and promise turned into doom and gloom. I need to see a divorce lawyer because I need to divorce myself from this football team. I am dialing 1-800-New Team. Oh, and how fitting that they lost to the Minnnesota Vikings on Sunday. The Jimmy Schwartz regime has run its course when Schwartz was fired by the Lions on Monday.

The Michigan State Spartans play in the 100th Rose Bowl Wednesday, Jan. 1. The Spartans suffered a serious blow with the suspension of senior middle linebacker Max Bullough. How can a guy who is the captain get suspended for the biggest game of his career? Stupidity on the part of a captain, who is a so-called leader of his football team. Bullough’s departure will hurt this Michigan State defense against Stanford. Max made all the defensive calls and has lots of playing experience. The Spartans who play behind him will have to step up in his absence. Stanford and Sparty will be one of the better bowl games. The crystal cheeseball sees it this way. Stanford and Son 23 and Sparty not so Smarty (Bullough) 16.

Michigan’s hoop team suffers a huge blow with the loss of center Mitch McGary. McGary will have back surgery and will miss the rest of the season. That is a shame and a huge blow to the Michigan basketball squad. Next man up for the Michigan reserve centers, it’s your turn to shine with the extra playing time.