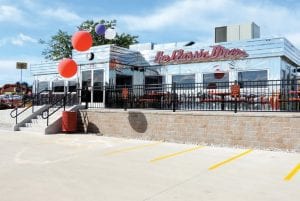 FLINT TWP. — From its black and white checkerboard flooring to its iconic red upholsteries and motorcycle motif, the Vehicle City Classic Diner, 3142 Miller Road, looks like a place where The Fonz might hang out.

The long-awaited 1950s-style diner is now open and serving hamburgers, hotdogs, root beer floats, shakes, sundaes and a variety of side items.

The shiny chrome diner was purchased in Lansing and moved to the site last summer where it has undergone extensive interior renovations. It opened quietly about three weeks ago but a grand opening celebration is coming soon, according to Ashley West, marketing director for Vehicle City.

The diner seats about 50 but there’s outside seating for up to about 40 more on the patio, said diner manager, Shelby Hendershot..

Business has been slowly picking up as more people become aware that the diner is now open, said Hendershot. 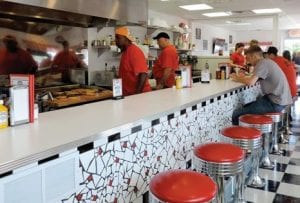 Patrons cozy up to the counter inside the newly opened Vehicle City Classic Diner.

A motorcycle theme includes clocks and neon signage but modern touches include digital signboards flashing news about the diner and upcoming events.

The diner is the centerpiece of an outdoor development at Vehicle City that includes a concert stage and test track.

Especially for anyone looking for a walk down memory lane, the diner provides the atmosphere right down to the corner booths and swivel counter stools. It is a cool place to, as the Fonz would say, “Sit on it.”

A classic diner and restoration movement is underway nationwide, according to the history provided by the American Diner Museum on its web site at http:// www.americandinermuseum.org/site/history. php

A true diner is a spin-off of old decommissioned railroad diners cars and trolleys that were converted into affordable eating and gathering places, according to the museum history.

“A significant number of vintage diners have been rescued from demolition and relocated to new sites in the United States and Europe,’’ the museum reported. “Manufacturers of diner structures are experiencing new orders or remodeling projects in a retro style. Along with nominations from other states the list of diners on the National Register is increasing annually.”

For more information about hours and events at the Vehicle City Classic diner visit its Facebook page at https:// www.facebook.com/vehiclecityclassicdiner? ref=br_ rs