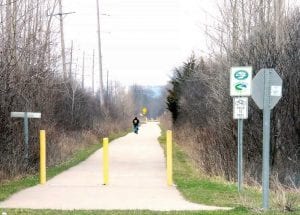 Cooler temperatures linger but snow for the most part has melted, making way for outdoor lovers to enjoy a walk along the Genesee Valley Trail.

It was built and dedicated in October 2011 and initially started on Corunna Road and ended on Linden Road in front of Genesee Valley Center shopping mall. About 3,500 additional feet was added in 2014 to connect the trail to the township park on Norko Drive. Last summer, the eastern end of the trail at Corunna Road was connected to a trail that now extends to Chevy Commons in Flint, near Kettering University. Now township officials say that attention is turning to the western end of the trail with the goal of eventually connecting it to trails in Swartz Creek.