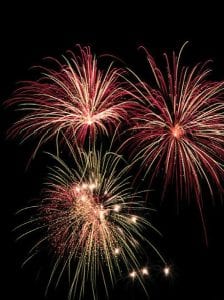 Vehicle City Harley Davidson on Austins Parkway is seeking a permit to set off fireworks on June 8.

FLINT TWP. — A spectacular fireworks show could be lighting up the skies over Flint Township next month at the Vehicle City Harley Davidson dealership, 2400 Austins Parkway, pending approval of its special event permit application by the Flint Township Board.

A request to hold an event from noon to 10 p.m. on. June 8 was removed from the township board’s May 14 agenda to allow time to consult the fire chief and gather more information. Specifically, the permit application did not include a description of the event and how the fireworks would be staged.

The board meets again on June 3 which the board agreed still allows time for the fireworks proposal to go through before the stated event date.

Documentation provided with the request from Wolverine Fireworks Display Inc. of Kawkawlin proposed a $1,500 show that would include a twopart opener, three-part main event and a three-part finale with 2 100- short touchdowns, 36 titanium salutes with silver tails and 72 color and report chains.

Proof of insurance coverage and a map of the Vehicle City grounds were included with the application. The map indicated that the fireworks would be staged in the vacant lot next to a vacant building, formerly Bennigan’s restaurant, directly behind the Harley dealership.