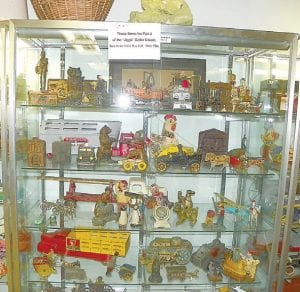 Variety, excitement, opportunities to win and employment all converge under one roof in the 16,000 square-foot building since Harris Brothers moved in last year.

The family-owned business needed more room and better accommodations when it relocated from its home of three years on Grand Blanc Road in Rankin, said Joe Harris, who runs the business with his wife, three of his seven children and their spouses.

The Antiques Mall, which Joe runs, is home to 40 dealers who rent booths to sell wares including antique furniture, jewelry, glassware and collectibles. 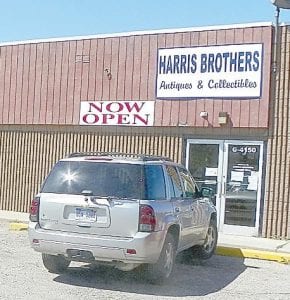 Joe’s wife Susan runs the embroidery department and his sons Don and David and daughter Darci run the auctions.

Brei Harris, David’s wife, runs a silk-screening business which draws business from all over the country. One of her biggest orders was for 33,000 T-shirts for the Valspar paint company to use in a national promotion. It was big job but they worked together and got it done, Joe Harris said.

Don’s wife Jamie does all the cooking and baking for a small concession stand open during auctions so customers don’t have to leave when they get hungry.

Besides regularly scheduled auctions on most Saturday nights, Harris Bros. has developed a following for its Shipsee North auctions on Mondays at 6 p.m. That’s when consignors bring in whatever they want to auction off from one of 15 rental booths that often are booked 2-3 months in advance, Joe said. Part of the fun is the mystery of what will be for sale, he said. Shipsee North is named after the renown Shipshewana Auction & Flea Market in Indiana. 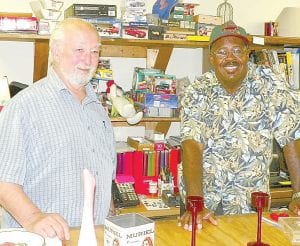 Patriarch Joe Harris (above left), who runs the antiques mall part of the business with Charlie Williams (right), who works in the store and also is a booth owner. At left, Items from estate of well-known toy collector Jiggs Geller are ready to be sold in an upcoming auction. There’s parking for at least 500 cars at Harris Brothers, a familyowned business on Van Slyke Road.

Sons Don and David got involved in their dad’s business when they were teenagers and ran a baseball card trading shop in a space next to his advertising business then on Fenton Road. They started doing baseball card auctions in 1996, Don said.

Last year’s move started a new era. “This is a great spot,’’ Joe Harris said. “We never had a mall before. (It) goes hand in glove with antiques.’’ The building had been vacant about five years and needed considerable repair, Joe Harris said. Once done, it provided a separate space for all their businesses. The auction seats about 250 and there’s paved parking for 500 cars.

There’s also room to showcase wares for upcoming auctions so customers get a preview. Currently showcased is merchandise for the Vincent “Jiggs” Geller Part II toy auction coming up Sept. 10.

Other upcoming auctions will feature vintage comic books and sports collectibles. An auction schedule is posted on the company’s website at www.harrisbrothersauctions.com