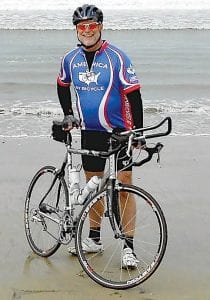 Jay Crane of Essexville is bicycling across America on a 3,457-mile, 33-day trip. He is shown here with his tire touching the Pacific Ocean on the first day of his trip.

FLINT TWP. — Just as she had done for the past 14 days, Donna Crane got up on Mother’s Day morning and marked off another milepost on the United States map spread out on her dining room table.

She was tracking the progress of her son Jay Crane of Essexville, who is bicycling across America on a 3,457-mile, 33-day trip that began April 24 in Costa Mesa, California and is scheduled to end May 26 in Amesbury, Massachusetts.

“He started with his rear tire in the (Pacific) ocean and will end with his front tire in the (Atlantic) ocean,” said Joy Hart, Crane’s sister. A trustee on the Carman- Ainsworth Board of Education, Hart shared details about her brother’s adventure with fellow board members at a recent meeting.

Besides fulfilling a lifelong dream, Crane also is raising money for Special Olympics.

A retired director of special education for Bay City Schools, Crane, 58, also has worked with a Special Olympics cycling team, his mother said in an interview at her Flint Township home.

“When he first planned this trip, it wasn’t to raise money. It was his (pleasure) trip,” Donna Crane said. “He thought about it and said “I think I can make some money for Special Olympics. So he put it out there and so far he has raised over $7,000 which was his goal,” she said.

Riding at the punishing pace of an average 115 miles per day, Crane has realized the full value of his mission.

“He said the other day, “Mom, I think I should have asked for more than $2 a mile,” Donna Crane said. “I think it’s worth more than that now that I have been on it.”

Crane’s blog takes his readers through the high elevations, the beautiful desert scenery, the weather changes and the aches and pains of each day’s long ride.

Crane has been an avid bicycler since he was young, starting with racing and then long-distance cycling, Hart said.

“He’s be the only one of my family who could do it,” she said of the cross-country trip. “He trained. He got himself ready.”

Their younger brother also sent a vote of confidence though their mom who speaks to Crane weekly by phone.

In one of those conversations, Jay told his mother that only two of the 28 riders making the trip with him are similar in skill level and the rest are speedy cyclers he has nicknamed the Gazelles.

“He learned on the first day out that you don’t get too far behind because you get lost,” Donna Crane said. “I told his youngest brother that and he said ‘Don’t worry about that mom. He is a strong rider.’ I passed that on to Jay. That is a compliment. They don’t always see eye to eye all the time.”

Crane naturally has his mother’s support.

“I don’t worry about him,” Donna Crane said. “He’s past worrying about. It’s just a challenge for him. I ask questions. I ask how he is doing. How was his day?”

Crane also calls her once a week when he’s home, all of her four children do that, she said, adding that her eldest child would be missed on Mother’s Day but she was sure he would call.

He blogged: “I am blessed to have some of the best Mother’s in the world, in my life. First of all there is my Mother who is undoubtedly one of the strongest, most caring and generous people I know. In my humble, unbiased opinion she has raised 4 incredible children and is a role model for all of us.”

Before he left for his trip, Crane brought his mother a trip itinerary map.

“He had it all mapped out for me, each day marked, how many miles he would ride each day and the list of elevation,” Donna Crane said. “I have it lying on my dining room table. Each morning, I get up and check him off.”

Hart helps keep their mother in the loop by making copies of Crane’s blog for her. Donna Crane does not have a computer.

“I print out the blog once a week and take it over to her so she can sit and read it,” said Hart who reads the blog daily. “She loves it. He writes creatively and is good at explaining what he is doing.”

Donna Crane said she likes seeing the pictures he posts too.

“Anybody can keep up with him,” Donna Crane said of her son’s blog at jayonthebike. blogspot.com. “I think he’s covered all the bases. He will make it,” said his proud mom.

Donations to Special Olympics can be made by following the link at the upper right corner of Crane’s blog.

Donna Crane said no special celebration is planned for her son’s return that she’s aware of.