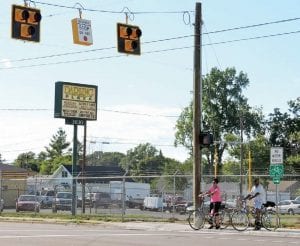 The watchful eye of the HAWK helps bikers and pedestrians safely cross busy Corunna Road where the end of the Genesee Valley Trail in Flint Township connects to the newly opened section of the trail into the City of Flint. The High-intensity Activated crossWalK (HAWK) signal is a new type of light used only at pedestrian crossings, according to the Michigan Department of Transportation. It is activated by a push-button. A flashing yellow light warns approaching drivers that a pedestrian wants to cross. The flashing yellow light is followed by a solid yellow light telling drivers to prepare to stop. The signal then changes to a solid red for drivers to stop. After a set amount of time, the solid red signal changes to a flashing red signal before going dark. Traffic resumes flowing until the button is pushed again. A second HAWK signal is placed where the trail crosses Court Street. Trail users now enjoy a longer ride along the non-motorized recreational trail, which mainly follows an abandoned railroad track bed. The 2.6- mile Flint Township section opened in 2011 and was extended about a half-mile west in 2014 to connect to the trail in the Flint Township Park. The 1.5-mile City of Flint segment opened August 6 and connects with the Flint River Trail into downtown Flint. 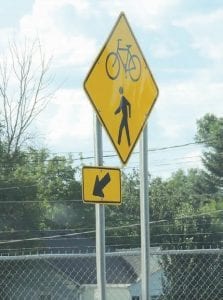