Heading back to school 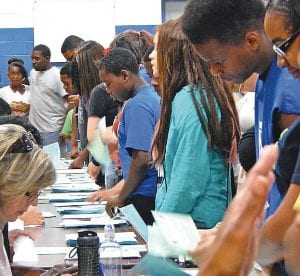 BACK TO SCHOOL — After listening to an orientation presentation from school officials, the Carman-Ainsworth Class of 2017 officially began their high school years on August 15 by collecting their class schedules and roaming the freshly waxed hallways to find their assigned lockers. The approximately 450-member Freshman Class is the largest influx seen in recent years since enrollment began dropping off, school officials said.