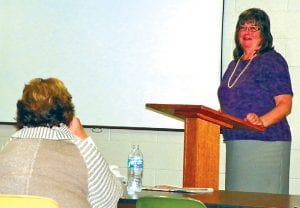 Linda Hamacher, executive director at Genesee Health Plan, speaks last week about the ballot proposal at an event sponsored by the League of Women Voters and Delta Sigma Theta sorority.

GENESEE COUNTY — What about Obamacare?

That is the No. 1 question voters keep asking about the November ballot proposal to renew the Genesee Health Plan for seven years, said Pam Nelson, GHP community outreach specialist about the service for uninsured low-income residents of Genesee County.

The Affordable Health Care Act (Obamacare) is not a universal health care plan and is not going to cover everyone, said Linda Hamacher, GHP executive director.

Health Care Act is scheduled to go into effect in 2014 but will not be not fully implemented until 2019.

Some GHP members will move directly into Affordable Health Care coverage but an estimated 25,000 residents of Genesee County will remain uninsured after January 1, 2014, Hamacher said.

She was accompanied at the forum by two women who gave personal testimony about how unemployment, divorce and sudden or chronic illness coupled with lack of health insurance led them to GHP services.

There is a lot of confusion still about the Affordable Health Care Act, said Hamacher who has conducted focus groups of low-income people who had a mistaken impression that it would do them more harm than good.

“Some people think, ‘well, we don’t need anything else locally now because the Feds are going do it,’” Hamacher said. “ I think most people in their hearts, I am hoping they will realize we are always going to need a locally ran safety net in this community that takes care of people who live in Genesee County – our friends, our neighbors, the people who do our hair, the people who maybe work for us, the people you see every single day that you may not realize are in need of help.”

Since it started 10 years ago, GHP has helped more than 60,000 Genesee County residents get primary and preventative health care, quadrupled the number of women getting mammograms; lowered by 25 percent the number of uninsured children in the county and reduced by 51 percent the number of people using emergency rooms as their primary care provider, saving millions in uncompensated care costs that hospitals pass on to all consumers, according to a GHP fact sheet.

Hamacher said GHP has very little funding for campaign marketing and must rely primarily on word-ofmouth and public events to promote awareness of the ballot proposal.

In the statement, the LWV voiced support for: “A basic level of quality health care that is affordable and available to all Michigan residents. This basic level includes access to preventative care; health promotion and education…; primary care; acute care; …affordable prescription drugs…”

Further, the statement said, “Public funding should be provided to eliminate financial barriers which prevent access to care and coverage for many residents of all ages…”

Hamacher noted that the health care proposal appears near the bottom of a lengthy ballot and is called the Genesee County Health Care Services Millage Renewal Proposal.

Voters can get more information about the ballot proposal online at www.renewgeneeseehealth.org, Hamacher said.