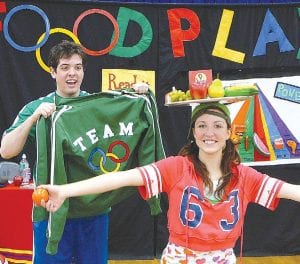 FOODPLAY delivered a serious message in a fun, entertaining format. Childhood obesity rates have doubled among elementary school children and tripled among teenagers in the past 25 years, according to a press release. One in three children are overweight and less than two percent of the nation’s youth are meeting their daily nutritional requirements. Kids on average drink more than 600 cans of soda and consume more than 150 pounds of sugar a year but miss out on recommended portions of fruits, vegetables and whole grains needed for optimal health.

During FOODPLAY’s fun-filled performance, children follow the antics of Johnny Junkfood, whose dream is to become a national juggling star, but he keeps dropping the balls because of his poor eating habits. With the help of the Coach of the National Junior Juggling Team and audience participation, Johnny learns to juggle the foods he eats to create a balanced diet. Children learn from him how to see through TV commercials, decipher food labels and make more nutritious choices.

FOODPLAY Productions was founded in 1982 by nutritionist Barbara Storper, under original sponsorship of the U.S. Department of Agriculture. It has reached more than 3 million children nationwide, garnered rave reviews, won top national awards and resulted in documented improvements.