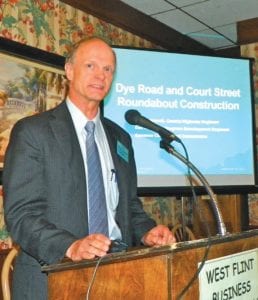 Ken Johnson, program and development engineer for the Genesee County Road Commission, making a presentation to the West Flint Business Association about a proposed traffic roundabout at Court Street and Dye Road.

FLINT TWP. — A fatal crash at the intersection of Dye Road and Court Street in 2010 is a primary reason it’s been chosen by the Genesee County Road Commission for its first traffic roundabout.

Ken Johnson, program development engineer for the road commission, recently presented plans for the project to the Flint Township Board, its Road Advisory Committee and the West Flint Business Association.

Johnson explained how a roundabout works, why the Dye and Court intersection was chosen and presented studies showing that roundabout lower crash rates, improve emissions and reduce after costs of accidents.

Dye and Court was chosen over other troublesome intersections because its accident statistics including the fatality and 28 other minor crashes between 2006-10 made it eligible for federal safety funding, Johnson said.

Placing a signal light at the intersection is not as strong a solution because it would not eliminate the possibility of motorists running the light as many currently are doing at the four-way stop. It also would involve the cost of adding electricity to operate the light.

A roundabout is a circular roadway that directs traffic through an intersection at low speeds. The proposed single-lane roundabout at Court and Dye will have angled entrances to force drivers to slow down. But the cubs will be mountable to accommodate the wider turning range of school buses and fire trucks that also use the intersection.

Flint Township Police Chief George Sippert voiced concerns about the about the height and depth of the roundabout. Others he has seen have landscaping or elevation high enough to discourage vehicles from running over it, he said.

“My concern is that with a flat roundabout and mountable curb, some people will blow right through the intersection like they always do,” Sippert said.

Daly said that Sippert’s comments would be taken into account during the engineering phase of the project which they hope to accomplish this winter. Currently, landscaping is not planned because it would require maintenance, he said.

“I want to impress on everyone that the road commission does not look at this as some type of engineering novelty that we are doing to keep with the Joneses,” Johnson said. “We see it as an effective countermeasure that can resolve problems seen at this intersection.”

Trustee Belenda Parker said she had doubts about the roundabout being any more effective than stop signs that many drivers currently ignore.

“I drive through that intersection all the time and it is to the point it is getting worse,” she said, adding that many drivers shoot right through without stopping.