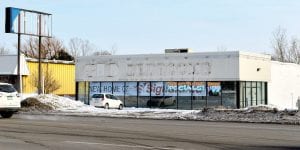 After sitting vacant for at least seven years, this building on Miller Road, formerly a Comfort Zone waterbed store, will undergo an extensive rehab to become the new home of Sign-A-Rama, as indicated by a banner now displayed in the window.

FLINT TWP. — About 10 new jobs, averaging $15 per hour pay, could be available by the end of the year, as part of the relocation of Sign-A-Rama.

The township board has set a public hearing at its March 16 meeting to take comment from nearby property owners about the establishment of a CRD.

“We’d like to see something in there and get it back on the tax rolls,’’ said Tracey Tucker, township economic enhancement and building director.

The CRD is similar to an Industrial Facilities Tax exemption except it is for commercial purposes, Tucker said. It would provide a tax break for planned improvements to the property.

The 10,250 square-foot free-standing building was built in 1985 and has a partial lower unfinished basement, he said.

“With the larger facility and the relief from the Rehabilitation Exemption we hope to purchase new pieces of equipment such as a new service truck, CNC Router and a Acubend,” Wallace said. Sign-A-Rama, currently located in the Yorkshire Plaza, has been doing business in the Flint area for 8 years and build a large customer base, Wallace said.

Services include custom signage from fabrication, installation, service, banners and yard signs. Tucker said that further information about the property from the assessor’s office will be provided at the public hearing.

If the Flint Township Board approves the application, it will be forwarded to the State Tax Commission for further review and approval. The exemption period would begin December 31, 2015 and end Dec. 30, 2026.