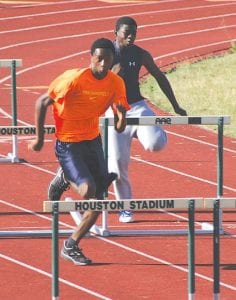 Boys’ hurdlers take to the track at Houston Stadium.

FLINT — While Flint Olympian Games co-chairpersons Dan Berezny and Rooster Daly may have put in the time and effort to organize and construct everything from locations to scheduling and more, one factor the duo has absolutely no control over is the weather.

As such, with the heat on Tuesday once again expected to reach 100 degrees, most of the events slated to take place that day were postponed. This includes the 12U boys and girls basketball games, which will now take place at the same time tomorrow at Potter Elementary, Flint Southwestern high school and Flint Northwestern high school, all soccer games have been moved to Monday and while all softball contests have also been cancelled, the event’s website did not have any rescheduling information.

There was a soccer game on July 11 that will now take place on July 23 at 6:30 p.m., as well. One factor that’s different at this year’s games in the exclusion of the Karate competition, a development that came about because of a scheduling conflict according to chairperson Jeffrey Wheeler.

With the opening ceremonies taking place on July 10, it’s the top three finishers in each event that will qualify to represent the United States at the 55th Annual CANUSA Games next month. This includes track and field athlete Tommy Groezinger in the adult men’s 100, Lavell Hamlin won the 14-15 boys 400 and Caspian Peavyhouse claimed the 1,500 and 3,000 titles, all of which were the only person to compete in each of those events. As for the 12-13 boys 400 it was Wesley Wright that came out on top, Calvin Moten was first in the 12-13 boys 100 and Hayden Emmerling was the 9-11 boys 800 winner.

With all of this action taking place on July 12 at Northwestern’s Houston Stadium, it was 15-year old Jonathan Fife whot was good for the 100 and 200 titles, 14-15 girls winners included Danielle Horton in the 100 hurdles and Mildranae Young in the 100 and 200 and Maria Smiley was the 9-11 girls 400 champion.

In 15U softball action, which began on June 25 and starts its playoffs the week of June 30, currently the Mayhem and its roster of players from Atherton, Bendle and Bentley are in first place, the Linden Eagles are second and in third place is American Associates from the Swartz Creek Community Schools system. That leaves the Bendle Tigers in the fourth spot, the Clio Mustangs are fifth and rounding out the charts is Phillips RV, which consists of individuals from Swartz Creek middle and elementary schools. The final two squads, Clio and Phillips, are actually 13U teams that chairperson Rachel Martinez described as, “dedicated enough to play with the older girls. Plus it gives them experience.”

Another wrinkle in the fabric of this event came on July 12 when a 12U boys basketball game at Potter had to be cancelled after an assistant coach objected so strongly to a pick set by an opposing player that he ended up running out on to the court. Coaches from both sides then began to argue with one another, forcing officials to call the game just minutes into the second half.

Today the games start at 4 p.m. and 5 p.m. with boys and girls 12U basketball contests, at 6 p.m. ice hockey tryouts and soccer are on board and the 15U softball league takes the diamond at 5:30 p.m.