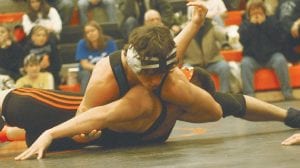 FLINT TWP. — It’s going to be tough just making the starting lineup on the Carman- Ainsworth wrestling team this year.

Especially in the lower weights, the Cavaliers are overflowing with talent, which means some very good wrestlers are going to be sitting out matches this season. But that’s a good problem to have for coach Tom Weissend.

“We have a couple of good guys in the middle and then a couple of good guys up in the heavier weights, but we should definitely be tougher in the lower weights,” said Weissend, entering his third season as head coach and 10th with the program. “The kids know they can’t just do whatever they want and make the team. They’ve got to work for their spots. But they love it. They push each other a lot.”

The Cavs are led by the coach’s son, Jacob Weissend, a district and regional champ who placed second in the Div. 1 state meet at 135 pounds last year. He is ranked second at 145 this year by michigangrappler.com and will pass the 200 mark in victories.

But it’s the lightweight wrestlers who will have to be tough as nails just to start this winter. Aaron DuPree was a regional qualifier at 119 as a sophomore last year, and will be back at that weight. He’ll be pushed there by junior Jalen Boone, who wrestled 112 last year, but could go as high as 125 this season. Malik Dawkins is an experienced freshman trying to squeeze in at 112-119. Wesley Cummings is a senior at 112 and one of the team leaders.

“The three guys leading the team this year are Wesley Cummings, Jake and Tae Pendleton,” said Weissend. “Luckily enough, that’s one at the lower weights, one in the middle and one in the heavier weights. It kind of gets my whole room rounded off. I’ve got a leader in every group.”

Shaquel Polacek was a 125-pounder last year who likely will move up to 135 as a junior. Fellow junior Brandon Wesley will drop from 135 to 130, but Darian Vaughn is another freshman trying to muscle in at 130. Senior Cameron Martin will go 140-145 for his senior year after seeing action at 152 last winter. Jeron Thomas is a sophomore up from 152 to 160, and junior Eric Bradley will be back at 171 after wrestling up to 215 to help fill out the lineup last year.

Carman dominated its district last year, but barely showed up for the regional. The Cavs voided three weight classes and wrestled with a makeshift lineup in a 42-29 semifinal loss to Bay City Western. Oxford rolled to the regional title and eventually the state crown.

“I think the kids went in thinking they couldn’t beat Oxford,” said Weissend. “We had a lot of kids miss weight and some didn’t show up at all. But we would have matched up well with Oxford. With Davison in our conference, we’re used to wrestling teams that are ranked and really tough. We’re definitely working on our mental game as well as our physical game this year.”