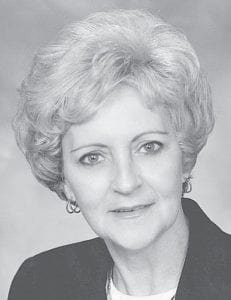 HELEN “FAY” RUSSELL-PORATH, 81, of Bear Lake (formerly of Swartz Creek), passed away at home holding the hands of her family, Friday, October 25, 2019.

Fay was born July 16, 1938, in Fleming, KY, the daughter of Earl and Callie (Dishman) Johnson. She attended Neon-Fleming Schools. She married Edward Russell, who preceded her in death in 1979. She then married Curtis A. Porath on June 3, 1984 in Swartz Creek. She had resided in Bear Lake since June, coming from Swartz Creek where she had lived for fifty years. Fay had been employed as the purchasing director for Bill Thomas Halo Burger for 40 years. She was the Club House Hostess at Sports Creek Raceway for many years. Fay was a member of St. Mary Queen of Angels Catholic Church. She also was a member of GFWC Swartz Creek Women’s Club and the Swartz Creek Fine Arts Association.

She was preceded in death by her parents; brother, Stoney Johnson; sisters, Hallie Tong, Jeanie Sturgill and Jolene Kelley.

“YOU ARE MY SUNSHINE, MY ONLY SUNSHINE.”

Tributes may be shared at www.sharpfuneralhomes.com.