Dodge rocked the high-performance car world in 2014 with the 707-horsepower Charger SRT Hellcat and Challenger SRT Hellcat, building supercar performance at affordable prices. They were the most powerful muscle cars ever – until now.

Earlier this month, Dodge shook the foundation of the entire performance car industry, when it launched the New York International Auto Show with its wickedly fast new 2018 Dodge Challenger SRT Demon – highly capable on the street, absolutely dominating at the drag strip. 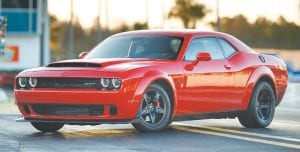 The Dodge Challenger SRT Demon is the fastest ¼-mile car in the world turning the quarter at an NHRA-certified 9.65 seconds @ 140 mph.

“With Demon, our goal was to build a car that would tattoo the Dodge logo into the subconscious of the general market, beyond even our loyal enthusiasts, said Tim Kuniskis, Head of Passenger Cars – Dodge, SRT, Chrysler and FIAT, FCA North America. “To do so, we had to set records that have never been set before, do more than has ever been done before, go beyond even the legendary Hellcat. The result: an 840 horsepower, 9-second muscle car unlike anything that has ever come before it.”

The heart of the 2018 Dodge Challenger SRT Demon is the supercharged 6.2-liter HEMI Demon V-8, rated at 840 horsepower and 770 pounds-feet of torque. The red-painted Demon engine has been certified to the SAE J1349 industry standard for its horsepower and torque ratings. The engine also meets all applicable legal emissions regulations. 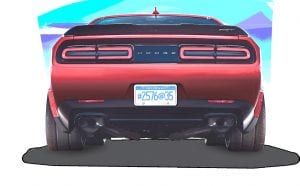 The Challenger SRT Demon is equipped with a set of four standard Nitto NT05R street-legal, drag-race tires, a first for a factory-production car.

The Challenger SRT Demon is equipped with a set of four standard Nitto NT05R street-legal, drag-race tires, a first for a factory-production car. The 315/40R18 tires were specifically designed and developed exclusively for the SRT Demon, with a new compound and specific tire sidewall construction.

The 2018 Dodge Challenger SRT Demon gives the driver the capability to set up the car for on-road precision, maximum drag strip performance or anything in between. The nerve center for those personalities is SRT Performance Pages and Drive Modes, displayed on the Uconnect 8.4-inch touchscreen.

Production of the limited-edition single model year Challenger SRT Demon begins later this summer, with 3,000 vehicles for the United States and 300 vehicles for Canada. Deliveries to Dodge//SRT dealers will begin this fall.