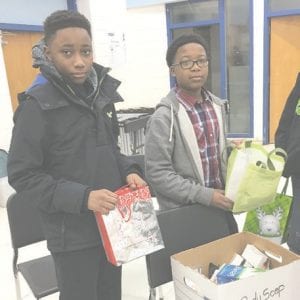 The Closet at CAMS provide students with hygiene supplies but gives these National Junior Honor Society members a chance to provide a service to their school community.

FLINT TWP. — Imagine being a teenager, trying to go to school to learn and achieve a better life, but faced with daily challenges of not having soap, toothpaste, deodorant, shampoo and other basic hygiene needs their parents struggle to provide.

Coming to the aid of students at Carman-Ainsworth High School and Carman-Ainsworth Middle School is the Cougar Closet – a private storehouse of supplies supported by Carman Cougar Charities Corporation (CCCC). The non-profit formed in 2014 as an outgrowth of a success all-class reunion for the defunct Carman High School. Its mission is to improve the educational opportunities and environment for C-A students.

“The kids who are in need, that is the heart of what we are doing,” said Alan F. Himelhoch, CHS Class of 1981, speaking at a recent C-A school board meeting, Himelhoch briefly talked about CCCC’s projects which also includes providing scholarship and winter coats and boots for elementary school children. Then he turned the floor over to other CCCC board members – Peggy Suess, CHS Class of 1973, who helps maintain the middle school closet and Jessyca Mathews, CAHS Class of 1995, who operates the high school closet. Milissa Kenworthy, a middle school teacher also spoke.

Suess said that when she started working at the middle school with Kenworthy, she “was kind of shocked,” to learn about boys needing items like foot powder that they could not afford to buy. The Closet started off slowly but has been getting many donations from alumni and others, she said.

“Even the little things you pick up at hotels, don’t throw them out,” she said. “Bring them to the school.”

Suess said she works closely with Kenworthy to keep track of what is needed but shampoo, deodorant, soap and feminine products are the biggest needs.

Kenworthy shared a note written by a member of the National Junior Honor Society, which has taken responsibility for filling orders when CAMS students make requests.

“My NJHS family has been creating help packages filled with soap, toothbrushes, deodorant, etc. and distributing them as requested,” wrote Zakaria. “These packages have been helping students all around the school get supplies that they do not have access to. I have enjoyed making the packages because they actually make a difference in our building. They have helped me develop many skills such as responsibility because I am expected to make the package and put everything requested inside. I was also taught that I don’t have to take credit for everything I do. I have made many bags and from what I can see everyone has been happy with our packages.”

Student requests are set up anonymously to avoid embarrassing anyone. Kenworthy keeps a box in the library that students have named “The Help Box.” They can fill out a form requesting what they need or get a form from their counselor. The students can also pick up their filled order from their counselor have them delivered privately to their lockers.

Kenworthy said she was surprised to see that students don’t check every box on the form, they only ask for what they need.

“We package an average of five to eight a week,” she said “There is definitely a need. We do more for males than females.”

Anyone interested in making donations can drop them off in the office at the high school or middle school.

Matthews keeps the Cougar Closet at the back of her classroom at the high school.

“Especially during the winter months, parents really can’t pay for basic necessities,” she said. “It really is shocking how many (students) come to teachers and say “I can’t get shampoo.”

All the teachers in the school know about the Closet and will come to Matthews and ask for supplies a student has requested. Some students are now comfortable enough asking that they will bring friends to The Closet also. Thirteen was the largest number of requests in a single day so far, she said.

At one time, Matthews also was stocking bottled water for students affected by the Flint water crisis and also clothing but another teacher has taken over the clothing closet.

“Please don’t let anyone think this is not a problem in the community,” Matthews said. “I don’t dare ask why, when they need it, if they ask for it, I will give it to them.”

Meeting that needs is one of the reasons the CCCC formed, according to its website.

“In contrast to our school experience (at Carman High School), the latest government statistics indicate that 78.1 percent of the students of the C-A district are economically disadvantaged, qualifying for the Free and Reduced Lunch program. It was clear to us that the need is significant, and while the reunion itself was designed as a charitable “party with a purpose” event benefitting the Carman-Ainsworth Community Schools, we saw that the effort needed to be organized, focused, and ongoing in order to maximize its impact.”

Both Matthews and Kenworthy praised the extra financial support from CCCC. Superintendent Eddie Kindle also praised CCCC’s efforts on behalf of C-A students and thanked them for their support.