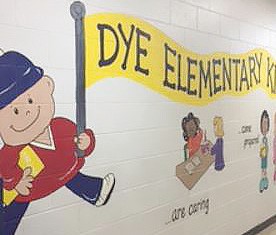 Dye Elementary will be one of three area elementary schools to get a reading center made possible by an online fundraiser sponsored by United Way and Brandon Carr, a Carman-Ainsworth graduate.

FLINT TWP. — Only about a week is left to donate to an online fundraiser that will provide a reading center for Dye Elementary School, 1174 South Graham Road, and two other area schools.

With a goal of raising $30,000, the United Way of Genesee County has teamed up with Brandon Carr, a Carman- Ainsworth High School graduate.

Carr, who now plays professional football for the Dallas Cowboys, kicked off the campaign with a $10,000 gift through his Carr Cares Foundation.

About 42 other donors have helped raise the total to $14,090, as of Monday, in the online campaign on Fundly.com that ends September 1. Donations can be made online at fundly.com/uwgc-clubconnect or by texting the word Carr to 41444.

Other beneficiaries of the fundraiser are Durant-Tuuri-Mott and Doyle Ryder elementary schools in the Flint School District.

Reading centers are needed because only 31 percent of third graders in Michigan are proficient readers compared to nearly 60 percent of all fourth graders nationwide who are not reading proficiently. 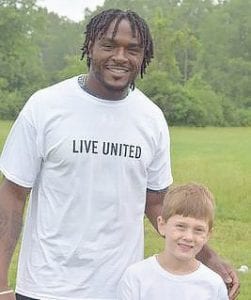 With the funds raised, reading centers at all three schools will receive nearly 1,000 books for grades PK-3, a listening library, and a Stereo Listening Center with four headphones. Each will be furnished with bookcases, colorful beanbag chairs and a reading themed carpet.

A Reading Center is designed to provide a safe and inviting place in a school where students can enjoy reading together, learn how to make reading a habit at home and access books year-round.

“Being able to read proficiently is very important for a child’s growth,“ said Brandon Carr. “I want to be able to help provide the proper resources and tools to allow students to be as successful as possible inside of the classroom. I believe the reading centers will be a great resource for students and also give them the opportunity to receive help when needed.”

Carr was born and raised in Genesee County and attended Carman-Ainsworth schools all his K-12 years. He’s also influenced by his mother, Kathy Carr, who spent 33 years as an educator in the Flint Community School district. Seeing the impact she had on her students helped Brandon realize the importance of becoming a positive role model and giving back to his community.

He established the Carr Cares Foundation in 2012 to create and support community-based programs that focus on early literacy development and physical fitness for youth.