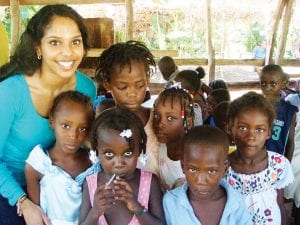 Sumita Joseph, 19, treats patients at a make-shift medical clinic while volunteering in Jacmel, Haiti (left). She spent two weeks in August volunteering, and while there she experienced many things, including visiting children in orphanages (above).

FLINT TWP.
— When Haiti was devastated by an earthquake in early January this year, many people around the world reached out to support the country and its people. While many donated money for various Haiti relief funds, one Flint Township resident spent two weeks in August volunteering in the country.

Carman-Ainsworth graduate Sumita Joseph, 19, said she initially wanted to volunteer in South Africa but after the earthquake, set her sights on Haiti. Joseph, the daughter of Noble and Romila Joseph, is studying physiology at Michigan State University and wanted to receive experi- ence in the medical world, along with the relief work.

“I was able to dip my feet in medical relief work,” she said of her volunteer work. “I treated kids with malaria and skin diseases, and also built church pews. It was really an eye-opening experience.”

Joseph embarked on her trip with Believers World Outreach, based in Tulsa, Okla. Once in Haiti, her group worked through Calvary Chapel Haiti Initiative. 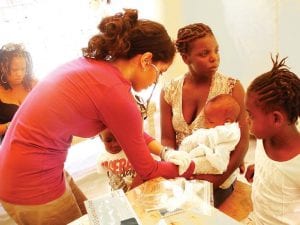 As one of the youngest members of the 22-person team, and the only one from Michigan, Joseph and her group stayed in the town of Jacmel. “Our aim was to serve and help, do whatever we can,” she said.

The 22-person team was divided into different groups: a construction group, a medical team and an orphanage group. Along with providing aid, Joseph and her group provided free, over-the-counter medication to Haitians. At all times, the group had a translator.

She also visited schools and orphanages, providing attention, care and interaction that some children have never experienced in their lives. “We went to churches and did things, such as providing meals for kids. It was amazing to see how thankful they are,” she said.

As with any foreigners visiting a new country, Joseph and her group drew much attention from the locals, who called the group “blancs” (whites). “Anytime we went somewhere, it was a big deal,” she said. “One time, we went up a mountain and when we reached the top, the whole mountain gathered around us. People loved us being there.”

While in Haiti, Joseph witnessed the devastation first hand and saw how little progress has been made in repairing the country.

“Things look just the same today as they did when the earthquake happened. The Haitians live around the destruction,” she said. “Money is not reaching the people. It’s sad to see the damage and destruction still there.” Households consist of wooden slums, and some Haitians live in massive tents, erected on an area much like a parking lot.

In addition to her volunteer work, Joseph was able to experience the dayto day life of Haitians. One day, she was allowed to visit the market, which was not permitted for women. “It was so unsanitary, and items were sold so cheap,” Joseph said. Joseph and her group members also were not allowed out at night, and members were divided by gender and slept in separate houses.

Despite the circumstances surround Haiti, the island still has hopes in her eyes. “Haiti has a ton of potential; it just needs new leadership and good leadership,” Joseph said. When asked if a future trip to Haiti would be on the table, Joseph was quick to respond. “I would love to go back to Haiti,” she said.