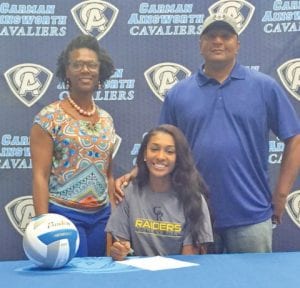 Che’Anne Hicks is flanked by her mother, Tamika, and her father, Jimmie, at her signing.

The reason Hicks chose the school was two-fold. She felt the team had a great coach, Chip Will, and she really liked the environment.

Hicks, who will major in psychology, knows moving to the next level will be a challenge. All the players who she will be playing with and against are just as talented as she is.

“Playing with girls that are on the same level as me will be my biggest challenge,” Hicks said.

Still, Hicks is excited about playing at the next level. She is really looking forward to working with a male coach.

Hicks feels her transition to the college game will be relatively smooth. But she also knows she has some work to do.

“I know that I will fit in, but I also know my spot won’t be handed to me,” she said.

Hicks is fully aware that none of this would be possible without the support she’s received from others. She had a special thanks for everyone who supported her along the way, including her mom and dad, Jimmie and Tamika, and her coaches

“I didn’t even want to play volleyball in the beginning, it kind of grew on me,” she said. – K.W.