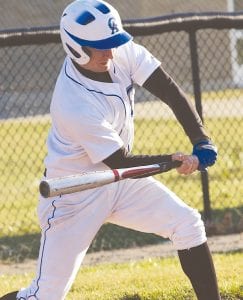 Baseball bats will be safer at the high school and college levels.

NATIONWIDE— As of this past season, the NCAA, as well as high schools in the state of New York have decided to move from aluminum bats to a composite material bat. Although the composite is similar to that of an aluminum bat, the material is designed to make the metal bats perform more like its wooden counterparts. The rest of the high school athletic associations across the country, including Michigan, will follow suit beginning next season.

The change has come at a time when there has been much concern about the safety of the defensive players, with an emphasis on pitchers. Just last season a California high school pitcher was hit in the head with a line drive from an aluminum bat. The impact resulted in a fractured skull, and put him in a coma for weeks on end. He eventually regained consciousness, and his recovery process went along quite well. In fact, not long after his recovery, he threw the ceremonial opening pitch at a San Francisco Giants game.

To prevent further incidents of that nature, high school and collegiate athletic associations have all agreed to make the switch. The new bats must meet the BBCOR (Bat-Ball Coefficient of Restitution) standards. All bats will require a negative-three drop, meaning that the bats’ weight in ounces must be three less than the bats’ length in inches. They also cannot exceed more than 2-5/8 inches in diameter.

Through one college baseball season with the new bats in effect, numerous positives have come from the switch. The old bats produced ball exit speeds from the bat that exceeded 100 mph, the new bats were expected to reduce that number. A direct effect of the reduced speed will be less home runs and decreased power numbers. In the long run, that will benefit players as major league teams will now have a better read on a player’s true power.

Another positive from the new bats is limiting runs through less home runs, which in turn, also speeds up the game. The game will now need to be played the right way with bunting and moving the player up a base before driving them in with a base hit, not just relying on home runs. The players with true power are still going to hit their share of home runs.

College baseball has been looking at ways to reduce scoring since the 1998 College World Series that saw the University of Southern California defeat Arizona State University 21-14. College baseball has used such methods as lowering the height of the pitching mound and regulating metal bats. This is just one more positive way of bringing the integrity of the game back and making it safer for all those involved.