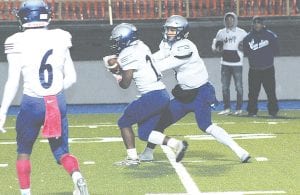 AREAWIDE – Local high schools will see a large change in the football playoff system beginning in the 2020 season after the Michigan High School Athletic Association has reconfigured its plans. Most notably, the top 32 teams will receive playoff berths rather than teams automatically earning playoff spots after reaching six wins.

The changes come on the heels of a couple local issues with the current playoff system. Undefeated Almont was forced to travel to Richmond in the pre-district game, despite having beaten Richmond once already and having the better record. The fluke was caused by the playoff points, which Richmond edged out Almont by less than one point due to the total bonus point average.

With the upcoming changes, no teams will be on the bubble at the conclusion of the regular season with 5-4 records like Imlay City/Dryden. The changes will also hopefully sort out situations like the one that Almont endured as well, with the Raiders forced to face back-to-back road games with long bus rides in the pre-district and district games, despite its undefeated mark.

With the former MHSAA playoff system, divisions are set and announced on Selection Sunday, after the 256- team field has been determined. With the new system, equal divisions are set prior to the season, with 67-68 teams per division.

Instead of six wins guaranteeing a playoff berth, there will be no automatic qualifiers. Teams with five wins will also no longer be on the bubble and all teams will be considered based on playoff points and no additional qualifiers. Points per win will also be changed, based on division, and will be significantly less. For example, Class A teams earned 80 points per win, but with the new system, Div. 1 teams will earn 60 points per win in the new system.

Bonus points will also see a huge change. According to MHSAA in the old system, “team A gets more points (8) for each win by an opponent Team A defeats, and less points (1) for each win by an opponent team A was defeated by.” The new system states that “team A will get points for each of its opponents wins, regardless of whether or not team A defeated the opponent.” Therefore, facing a team with a better record will generate more bonus points. The bonus points will then be multiplied by either three, four, five or six, depending on what division the team falls into.

The only part of the system that remains the same is how out-of-state teams will be placed into divisions based on enrollment.

The changes may possibly affect the way teams approach the season, as well as scheduling and the out-of-league opponents each team decides to play. With teams vying to be the best of the best rather than just securing a set number of wins, the playoff field could see great variation in upcoming seasons as well.