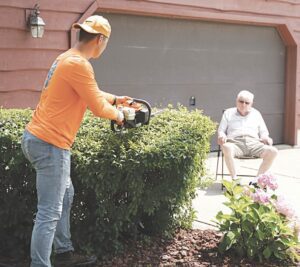 DAVISON — What started as a summer gig mowing lawns for two Davison teenagers eventually turned into development of a mobile app which enables clients to find and hire young adults in their area for the completion of home- and yard-based services.

Robert Walker and Austin Pariseau started their company, Gas Money, after the duo spent the summer of 2019 doing mowing and other odd jobs to make money.

In January of 2020, Walker, then a senior at Davison High School, and Pariseau, a freshman at Adrian University, the pair got the idea for Gas Money. The idea came to be as a result of the previous summer, in which they both did odd jobs such as lawn mowing and landscaping for people in Davison.

“It’s a very surreal feeling,” they said in a statement. “We started as doubles partners in tennis and now we are running a service platform together.”

With Walker involved heavily in school and Pariseau focused on obtaining a tennis scholarship, they said they did not want to feel trapped with a minimum-wage job such as fast food like some of their other friends. 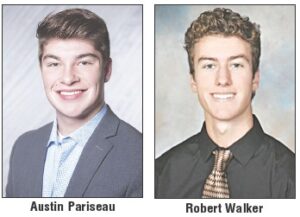 They said they wanted the freedom to work when they wanted and to essentially be their own bosses.

This idea, coupled with the fact that they were both young adults, helped them come up with the name “Gas Money” because almost any high school or college student needs gas money, so they decided to go with the name because it fit exactly what they were working for.

After completing jobs here and there throughout the latter half of 2019, Walker and Pariseau said they knew they would either have to become “legit” through the formation of an LLC or scale back and stop Gas Money when they both entered college.

After putting much thought into it, they created Gas Money LLC in January of 2020 and decided to establish large goals for their newly formed business.

Walker and Pariseau printed out flyers and went around neighborhoods spreading the word about Gas Money.

They also set up a Facebook account, and began posting updates and ads about their new business. They said they focused on emphasizing the “fully student-led” aspect of their business, which helped them attract lots of clients.

Unfortunately, right after starting the LLC, COVID-19 hit and the pair was unable to start completing jobs until late April.

During COVID-19, their research focused on the business models of Uber and Thumbtack, two gig-based companies that also connect independent contractors to an established client base.

After researching many companies of this type, the pair knew that creating a mobile app would be the best chance at scaling Gas Money.

Through the Gas Money app, the services offered include lawnmowing, landscaping and car washing, to name a few, but their goal is to eventually accommodate any service that can be completed by a high school or college student.

Unlike other gig-based platforms, they said, Gas Money is fully student-led, and all contractors that offer services on the Gas Money App are 16-24 years old.

Gas Money contractors can create their own schedules and communicate directly with clients through the app, and they also have the ability to collaborate with other contractors in their area.

Walker and Pariseau said the Gas Money App is completely free to use, and it generates revenue on a commission-based model from completed jobs.

“Our mission is to provide young adults with the opportunity to become their own boss and develop real-world skills in communication, leadership, and accountability,” they said in a statement. “Gas Money is more than just a service platform: we are the workforce of the future.”

Long-term, the pair said they “hope to one day have Gas Money available in communities all across America. Our goal is to provide this opportunity to as many young adults as possible so that they can experience the real-world benefits of self-motivation and entrepreneurship.”

The app is soon to be released and can be found online in Apple and Android formats.