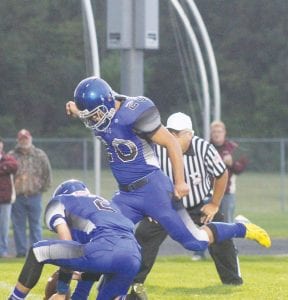 Caleb Ruffin scored on runs of 4 and 24 yards to make it 20-0 after one quarter.

Davonte Miller returned an interception 20 yards for a touchdown, and the Cavs’ defense later accounted for two more points on a safety when an Arthur Hill snap on a punt attempt sailed into the end zone.

Ruffin’s third touchdown, on a 13-yard run, made it 43-0 nine seconds before halftime.

With a running clock in the second half, Jalen Lewis got the only score of the half on a 9-yard touchdown run 35 seconds into the fourth quarter.