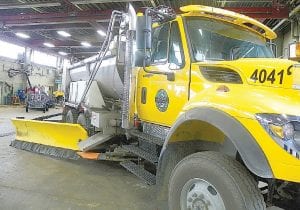 Road salter and plow truck with a laser-guided side wing down to cover a wider swath of road in one pass. One like this will be displayed at Back to the Bricks.

GENESEE COUNTY — After a snowstorm, when a big yellow county plow truck sweeps down the road, there is more skill to that task than meets the eye.

You can see for yourself how to drive one during a special exhibit being organized by the Genesee County Road Commission for this year’s Back To the Bricks car show, Aug. 16-20.

Simulators actually used to train snowplow drivers will be available for an up-close, hands-on look behind the controls, said Bob Slattery, GCRC director of information systems planning and public relations.

“You depend on us (GCRC) to plow roads and fix potholes, here is another side of us you might not be aware of,’’ Slattery said. “The multifaceted exhibit will highlight the fact that our equipment is high-tech and our employees are trained professionals, not just truck drivers.”

GCRC’s main downtown display Friday and Saturday at the southeast corner of Saginaw and Court streets will have an assortment of equipment old and new. A vintage horsedrawn grader and snowplow that’s been on permanent display outside the road commission office is being spruced up for the exhibit.

Equipment shown will range from a 1915 Fresno Scraper (ditch digger) to the newest ultra-high-tech road grader which does not have a steering wheel but is maneuvered with a joystick. That’s a long way from the early days when a road salter was two guys shoveling salt from the back of a truck.

Also displayed will be a real traffic signal which is much taller than most people realize and a cutaway engine showcasing the innerworkings of the big trucks, Slattery said.

GCRC employees will be there to talk to the public about training and using the equipment. Flat-panel monitors will show videos of training procedures and equipment use.

Employees of the 82 road commissions statewide and their families have been invited to join the fun in the GCRC hospitality tent.

Food vendors will be on site, children can get specially-created peel-and-stick temporary tattoos, and special diecast commemorative lapel pins will be distributed.

During the Rolling Cruise from 5-10 p.m. on Wednesday and Thursday evening, some of the GCRC’s featured equipment will be displayed during the Mega Site event at Saginaw and Hemphill Roads, Slattery said. Look for it right next to the display of million-dollar cars at Diplomat Pharmacy.

To crank up interest at the Aug. 16 kick-off Bricks Flix movie event at the US-23 Drive-in on Fenton Road., the GCRC will bring in a few pieces of the featured equipment.

GCRC staff have been working on this event for nearly a year.

“Back in October, we approached the Back To the Bricks Committee with an idea for a display or exhibit about the Road Commission and how we have grown from a horse-drawn beginnings to high-tech, high-skilled partners in the community,’’ Slattery said. Interest was so great, plans spread from one day to all four BTTB days.

“This is unique and different and expands the scope of Back to The Bricks,’’ Slattery said.

He stressed that no public funds were spent for this exhibit. It is sponsored by donors including Chase Bank and Michigan CAT (Caterpillar).