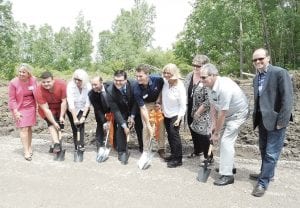 MUNDY TWP. — When Mundy Township officials updated their master plan for parks and recreation in 2015, they pledged to “take an active role in the delivery of recreational opportunities.”

By then, the gears already had been in motion for a couple of years, and planning was underway for the first phase of a 100-acre park to be built on a primitive site tucked behind the bustling commercial district of the Hill Road corridor.

On June 18, dignitaries from throughout the county gathered at that site, located between Van Slyke and Fenton roads, to break ground on the first phase of the project, which will include a two-mile non-motorized trail, as well as lighting, parking and utilities.

The hallmark of the overall plan, however, is Genesee County’s first fully-accessible baseball field.

For four years, the township has worked with the Miracle League of Greater Flint to design the field which, when complete, will be one of only six in the state and 300 around the world. 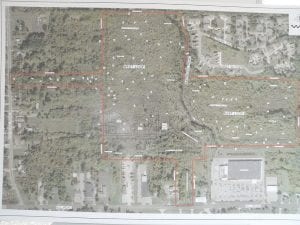 “Creating a level playing field for kids in Genesee County is an urgent need,” said Brian Caine, Miracle League director. “We want to ensure that equal access to recreational activities is available to all residents, and the new Miracle League field is an important step toward that goal.”

Fundraising for the field continues. To date, about $100,000 of a $400,000 goal has been raised through contributions from citizens, businesses, corporations and foundations.

“The support this project has received from the community has been outstanding, but we have more work to do,” said Caine.

The complete park plan, which includes pavilions and picnic areas as well as an ADA-compliant playground, received a big boost from a state Department of Natural Resources Trust Fund Grant and a voter-approved, $2.5 million bond, according to township Manager Chad Young.

“Today is an important step in improving the quality of life for the citizens of Mundy Township and surrounding areas,” Young said.

The initial phase of the development is slated to open this fall.