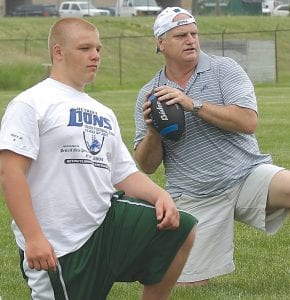 Eric Hipple demonstrates the art of passing to a camper at the Detroit Lions Youth Football Camp at Grand Blanc High.

GRAND BLANC — Eric Hipple seemed to be having as much fun as the kids Tuesday in the Detroit Lions Youth Football Camp at Grand Blanc High.

The former Lions quarterback laughed with them, cheered them, ran alongside them, played catch and generally fired up the spirit of the occasion.

“Well, first of all, football’s fun,” said Hipple, Detroit’s top quarterback through most of the 1980s and now a still-energetic 53. “Then, when you’re able to work with kids, it’s just really enjoyable.”

About 60 kids took part in this year’s camp, which started Monday and wraps up today. Boys and girls ages 6-14 received non-contact, fundamental football instruction from several coaches, chalk talk and video sessions, and took part in skills contests and scrimmages. They also went home with a Lions Camp T-shirt autographed by Hipple, and got a 10-minute pep talk and question-and-answer session with the nine-year NFL veteran.

“I was one of the guys that got pushed off to the side,” Hipple said of his early years in the game. “But I didn’t get frustrated. The coaches said, ‘Hang in there. It’ll get better.’ It’s about not giving up.”

He related stories of his days in the NFL, including a humorous description of his greatest play. The 96-yard touchdown pass to Leonard Thompson almost didn’t happen because, after faking a handoff and turning his back to the defense, Hipple stood in the end zone and couldn’t find the receiver, who had broken off his route and was on the other side of the field.

The quarterback focused on fundamentals during his group sessions and admitted to the kids that he didn’t really know how to throw a football until his freshman year in high school. He taught them basics, like the formation of the thumb and the fingers, how the thumb goes down when you release it, how to keep shoulders square, balance on your feet, the follow-through, the motion.

But he also discussed the intangibles of leadership.

“These are the other skills that really encompass the quarterback position,” he said. “How not to get frustrated, how to communicate to the guys around you, how to have an optimistic, winning attitude, how to look at a teammate in the eyes so when you’re talking you communicate correctly. Make sure you’re confident in the things you say, don’t look down. Those are the all-encompassing things that, at this age, are particularly important.”