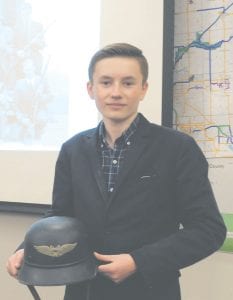 Lucas Hartwell shows a helmet issued to the Luftschutz, a volunteer civilian arm of the Nazi war machine.

SWARTZ CREEK – It was just one paragraph in a book, but it spurred 14-year-old history buff Lucas Hartwell to dig deeper into the story of teenage freedom fighters during World War II.

“I was astounded that these boys would be moved to commit acts of sabotage, especially for their age,” said the Grand Blanc Middle School student.

Hartwell turned his research into a presentation, which he shared with members of the Swartz Creek Area Historical Society on Wednesday, March 8.

When the German Army invaded Denmark in April 1940, it was considered one of the greatest surprise attacks of the war, Hartwell told about 40 people who gathered at city hall.

It was also one of the shortest operations, lasting just six hours before the Danes surrendered.

Knud Pedersen, the 15-year-old son of a clergyman, believing his government had betrayed its people, formed The Churchill Club, one of the first resistance movements to oppose the Germans, Hartwell said. 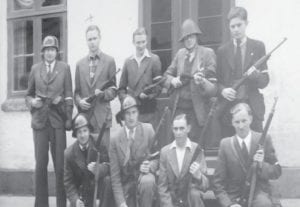 An historical photo taken during a reunion of members of The Churchill Club.

The group of eight teenage boys started out committing simple acts of subversion, such as moving street signs to confuse the interlopers who were unfamiliar with the lay of the land.

As the club grew to 28 members, they stepped up their repertoire, damaging vehicles, raiding barracks and stealing helmets, boots and weapons.

They amassed an impressive arsenal of guns, which they wrapped in plastic and buried in their mothers’ gardens, Hartwell said.

In 1942, authorities imprisoned the teens. News of the boys’ arrests quickly spread, which encouraged the growth and consolidation of other underground movements and solidified the resistance.

When the British liberated Denmark in 1944, the teens were celebrated as heroes.

“I think history is fascinating,” said Hartwell. “Everything prior to now influences the present and the future.

“I love local history, Michigan history and especially anything about Flint and the auto industry. I know a little bit about World War II, but when I stumbled on this piece of the pie, it caught my attention because I can relate to these boys.”

Hartwell volunteers on archaeological digs at the Perry House in Grand Blanc. He also works at a metro Detroit auction house that specializes in stamps, coins and historic memorabilia.

The next Historical Society meeting will take place April 12 at Mary Crapo. The public is always welcome.