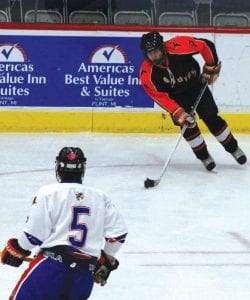 Flushing/Carman-Ainsworth’s Joe Montpas controls the puck during the team’s season opener against KBH United (Kearsley/Brandon/Holly) at Perani Arena in Flint on Nov. 20. The Raiders’ previously-scheduled game against the Alliance (LakeVille/North Branch/Dryden/Goodrich) on Saturday did not take place and Wednesday’s contest at Flint Iceland Arena against the Metro League Griffins (Fenton/Linden) faced off following our Wednesday deadline. Flushing is also back in action on Saturday at Iceland against Swartz Creek/Clio.