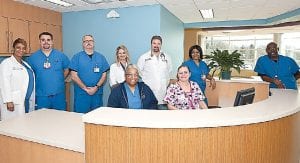 FLINT TWP. — A newly expanded emergency department at Hurley Medical Center will offer twice the size of the previous facility when it officially opens to the public at 5 a.m. on March 4.

“We are thrilled we are able to open this brand-new, state of the art emergency trauma center that basically doubles the size of the facility we previously had,” said Melany Gavulic, Hurley’s interim president and chief executive officer, in a press release.

“Hurley Medical Center is investing in the future, allowing us to better serve the needs of our patients, and the greater Genesee County community as a whole” she said.

The trauma center is named after the late Paul F. Reinhart, who passed away in 2009. He worked for the Michigan Department of Community Health as Deputy Director of Medical Services Administration and served on the executive board of the National Association of State Medicaid Directors. He was dedicated to ensuring adequate and fair distribution of Medicaid and Medicare funding for hospitals throughout the state.

The expansion has been in the works for years and construction began in the spring of 2010.

The current emergency room handles about 90 patients per year, including some of the most seriously injured accident victims. Hurley houses the region’s only Level I Trauma Center, where thousands of patients receive the highest clinical care available 24/7, 365 days a year.

“This ED expansion project will benefit our patients, staff, physicians, visitors and the entire community, and none of it would have been possible without the initial support from the Mott Foundation,” Gavulic said.

The Hurley Foundation received a oneyear grant of $232,000 from the Charles Stewart Mott Foundation for a Neighborhood Redevelopment and Greenbelt Project in September, 2006.

“The Mott Foundation grant enabled Hurley to produce innovative plans for our campus construction and renovation as part of a five-year strategic planning process,” Gavulic said.

Hurley’s greatly expanded and improved emergency facility offers a drop-off a lane in front of the new main, adult and pediatric ED entrance.

Significant improvements in the new department includes up to 50% more patient room, private rooms for adults and children, decreased noise levels and integration of new technologies.

Hurley is transitioning to a paperless electronic medical record system. When implemented, paper charts will no longer be used. All patient information will be immediately available, as soon as it is entered, from any computer in the hospital and from remote locations through secure Internet connections.

The new ED will take over the entire main floor of the east wing, then extend out another 25,000 square feet toward Fifth Avenue for a total of 50,000 square feet.

This $30-million-plus expansion project represented one of the largest construction undertakings Genesee County has seen in quite some time, which benefited the entire community. — Rhonda Sanders