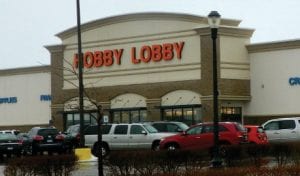 The Flint Township Hobby Lobby, 3291 Linden Rd., is part of a lawsuit filed by owners of the chain against the federal government.

FLINT TWP. — Hobby Lobby, which operates a craft store at 3192 Linden Road, is embroiled in a legal battle pitting religious groups against the government health-care reform.

Oklahoma-based Hobby Lobby has filed a lawsuit seeking exemption from a mandate under the Affordable Care Act that would force the company to provide insurance coverage for its employees that would pay for morning after or week-after contraception pills.

The lawsuit was filed in September 2012 against the U.S. Department of Health and Human Services Mandate according to press releases provided on the web site of the Becket Fund for Religious Liberty, a law firm representing

Hobby Lobby and several other litigants.

In a letter written in September by David Green, Hobby Lobby founder and CEO, he said that he and his family have always operated their company in a manner consistent with Biblical principles. Unlike most major retailers Hobby Lobby stores are closed on Sundays and the company also purchases full-page ads for Christmas and Easter in newspapers of all major cities where its stores are located.

Green said that forcing businesses to provide the “morning-after” and the “week-after” pills in health insurance plans is a challenge to their religious freedom.

“These abortion-causing drugs go against our faith, and our family is now being forced to choose between following the laws of the land that we love or maintaining the religious beliefs that have made our business successful and have supported our family and thousands of our employees and their families. We simply cannot abandon our religious beliefs to com- ply with this mandate,” Green said.

For failing to comply, Hobby Lobby faced fines up to to $1.3 million per day beginning Jan. 1, 2013 but reportedly has postponed the effective date for the penalty a few months by shifting the start of its employees’ insurance plan year.

So far, Hobby Lobby’s legal appeals for exemption have failed.

Both the District Court for the Western District of Oklahoma and the Court of Appeals for the Tenth Circuit have denied motions for injunctions.

In late December, Hobby Lobby’s Emergency Application for Relief to the Supreme Court also was denied for failing to “satisfy the demanding standard for the extraordinary relief they seek.”

Lawyers for Hobby Lobby said they will continue to pursue their appeal before the Tenth Circuit Court.

“The Supreme Court merely decided not to get involved in the case at this time. It left open the possibility of review after their appeal is completed in the Tenth Circuit,’’ said Kyle Duncan, Becket Fund general counsel, in a press release.

He said that Hobby Lobby wold continue providing health insurance for qualified employees but did not intend to pay for “abortion-inducing” drugs.

Forty-five separate lawsuit against the HHS mandate are now pending. Hobby Lobby’s lawsuit was the fifth filed by a for-profit plaintiff and is the largest and first by a non-Catholicowned corporation, according to the Becket Fund. It differs from Catholic for-profit organizations that are legally challenging the HHS mandate because Hobby Lobby does not object to providing general contraception for its employees.

Last week, President Obama announced some concessions to the HHS mandate, effective in August for non-profits.

But Becket lawyers said it does nothing to protect the rights of family businesses like Hobby Lobby which still is pursuing full exemption.

Various government entities involved in the lawsuit have argued that Hobby Lobby, though religious in its practices, is a secular company and therefore not exempt from the HHS mandate.