Hockey tournaments put on ice because of COVID-19 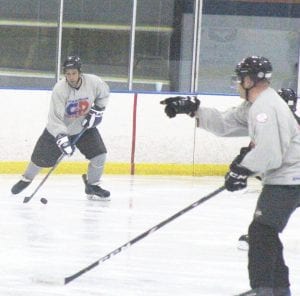 A Carman-Ainsworth player assesses his options from the defensive end during last year’s tourney against Flint Central. Photo by Brandon Pope

BURTON — The spread of the coronavirus, along with the new Stay at Home, Stay Safe Executive Order issued by Gov. Gretchen Whitmer on March 23 has put the Flint/Lapeer Old Timers hockey tournament and annual alumni high school tournament on hold. Both have said they are holding out to possibly host their tournaments later this year.

“Due to the COVID-19 pandemic the Flint Oldtimers Tournament has been canceled,” confirmed Mike Pettey. “We felt the need to do so for the safety of all our players. We had seven Canadian teams and three other out-of-town teams coming. We may plan something this summer after the pandemic has cleared.”

The Oldtimers tournament, in its third season, was to have eight teams per division in 40+, 50+, 60+ and 70+ divisions. It was going to take place April 3-5 at Crystal Fieldhouse in Burton.

“Our tournament has not been big enough to contribute to any certain beneficiary yet. We do plan on contributing money to a good cause as soon as we are making enough money,” said Pettey. “For now, all proceeds go back into our Flint Oldtimers slush fund, which helps fund the tournaments that we go to during the winter months. We currently attend seven tournaments over the season. We also host two tournaments at the Crystal Fieldhouse; our annual tournament in April and a Thanksgiving tournament over that weekend.”

The annual high school alumni tournament was going to have a hurdle to overcome after the closing of the Polar Palace Arenas in Lapeer last April, that offered up two sheets of the ice for the tournament, along with the sheets at Crystal Fieldhouse.

Rico Phillips, organizer for the tournament, did not return an email on the status of the April 25-26 tournament. We’ll provide details once we have an answer.