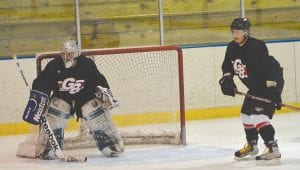 The Grand Blanc 18-and-up alumni hockey team worked for possession of the puck during the first period of its game against Powers last Saturday night.

BURTON— For the second year in a row, the annual high school hockey alumni tournament hit the ice this past Friday, Saturday and Sunday at Burton’s Ice Mountain Arena. Eightthousand spectators poured into the two-rink facility over the course of the tournament, which helped the tournament organizers raise more than $1,500, as well as 2,000 boxes of cereal, in an effort to help people in the area.

“This (was) a charity event,” said tournament director and Swartz Creek alum, Eric Lemieux. “We partnered with the Eastern Food Bank and Michigan Youth Hockey Scholarship Fund. We (asked) spectators and team players to bring a box of cereal to donate at the door of Ice Mountain Arena. We are all trying to give back to the community that gave us our education.”

The tournament was a huge success last season, and since then, has drawn the attention of several people, including several former players whose school was not represented the first time around. This year’s bracket was split into two divisions, one comprised of 18-and-up teams, and the other made up of 30-and-up teams.

In the 18-and-up division, it was the Swartz Creek Dragons taking first place, as they defeated Clarkston in the championship game, 6-3. As for the 30-and-up bracket, victory was taken by Flint Kearsley, which topped Swartz Creek, 7-1.

“For me it was very overwhelming,” said the tournament’s public relations contact, Rico Phillips, who also suited up for Flint Southwestern. “When you put something like this together, you hope that it falls together, and when it does, it exceeds your expectations, and it does nothing but make you feel good. For us, it even gave us energy to continue this next year, and build it and grow it in other ways.”