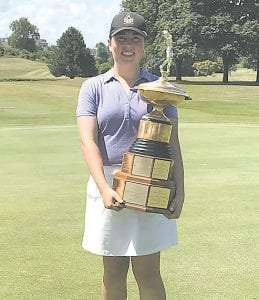 SWARTZ CREEK – The Flint Junior Golf Association (FJGA) wrapped up its summer season last Wednesday with a new pair of champions for its 18-hole Jack Nicklaus division. In the girls’ championship flight, Kearsley’s Grace Hoffman took home the honors, while Brendan Silpoch of Grand Blanc won the honors in the boys’ championship flight.

Played last Monday through Wednesday at Swartz Creek Golf Course, the final event of the FJGA season was a three-day tournament with the top-four individuals from Monday’s first-round of stroke-play action advancing to a match-play tournament on Tuesday and Wednesday.

Hoffman qualified as the No. 1 seed in the girls’ championship flight and faced Grand Blanc’s Madison Brigance, who was the No. 4 seed, in the first round. Hoffman won the match 5&4 to advance and play Fenton’s Brook Herbstreit, who won 1-up over Davison’s Isabel Mabry after 20 holes. Hoffman secured the title with a 4&2 final. 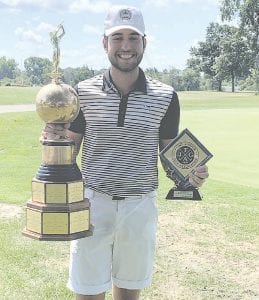 In the boys’ championship flight, Ranveer Ajimal of Grand Blanc, the No. 1 seed, defeated teammate Ashton Gaulin 1-up after 19 holes to advance to the final. In the other semifinal, Silpoch, the No. 3 seed, won 1-up over Jack Kolka of Flint Powers to advance. Silpoch then defeated Ajimal 2&1 for the title.

The girls’ first flight saw No. 4 seed Madeline Swett of Goodrich secure first after finishing 2-up over Kelsey Malone in the semifinal before defeating Davison’s Chloe Evoy 5&4 in the final. Evoy advanced after winning 3&2 over Emily Madill of Goodrich in the semifinal.

Meghan McNamara finished first in the girls’ second flight with a 4&2 win over Alexandra Kekel. In the semifinal, McNamara, the No. 2 seed, won 4&2 over Sydney Coppola. Kekel, the No. 1 seed, won the other semifinal 3&1 over Charis Jones to advance.

Grand Blanc’s Grant Foren, a No. 2 seed, took first in the boys’ first flight, first defeating Pierce Paling, the No. 3 seed, 6&5 in the semifinal. In the other semifinal, Zach Limas, the No. 1 seed, won 3&1 over No. 4 seeded Grant Carr. Foren won 9&7 over Limas in the final round.

For the boys’ second flight, Austin Bishop, the No. 3 seed, took home the win, first defeating Lapeer’s Nolan McGeary, the No. 2 seed, in the semifinal 6&4 before winning 4&3 over No. 1 seeded Andrew Campbell in the final. Campbell advanced to the final after a 3&1 win over No. 2 seeded Nathan Reynolds in the semifinals.