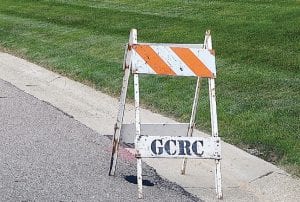 A road commission construction sawhorse alerts motorists of small hole in the street.

FLINT TWP. — Residents of Highland Meadows Drive in the the Western Hills subdivision are unhappy about deterioration of their street after paying to have it repaved fairly recently.

One resident, Earl Gilcreast, came to a recent township board meeting to voice those concerns in person.

He spoke of a hole in the pavement in front of one home and other pavement cracks that residents expect will only worsen when winter comes. He also noted that a Genesee County Road Commission construction sawhorse has been placed over the hole in question, indicating that the road commission is aware of it. But Gilcreast said he and other residents want to know what recourse is available for them.

Township Supervisor Karyn Miller responded that the street was repaved with a special assessment in 2006 and it is too soon for the road to have holes in it.

“We need to take a look at those roads,” she said. “They were supposed to last ten or more years.”

She also said that road complaints from residents are automatically forwarded to the road commission to handle.

Shesaidthetownshipkeepsaarecord of all calls and complaints. Sometimes road crews come out right away.

The hole on Highland Meadows had not been repaired a week after the board meeting.

With the street done as recently as 2006, there should not be problems, Miller said.