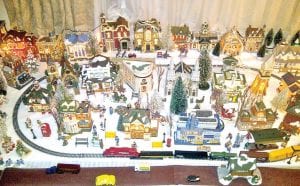 Elaborate holiday village displays like this one at the home of a Flint Township resident are a treasured Christmas tradition.

GENESEE COUNTY — It takes a village to raise a Christmas tradition that dates back to the early 1900s, according to historical references.

Sloan Museum is upholding that tradition with the opening of its exhibit “Holiday Railway Village” on Saturday November 8. The miniature Dickens style village will be displayed until January 4, 2015.

Speeding miniature trains will guide visitors’ wonder-filled eyes through a wee world of more than 200 buildings, characters and scenes set in a winter landscape, according to a press release.

Christmas Villages have been traced as far back as 1928. Putz houses, as the early ones were called, were decorative cardboard buildings made in Japan and most popular with Germany families. These putz houses were usually displayed at the base of the Christmas tree, on mantels and tabletops.

Sloan Museum will launch its Holiday Railway Village display on Saturday for public viewing through the first of the year.

Modern collectible village versions made of porcelain became popular in the 1970s and prevail to this day with Department 56 and Lemax being two leading manufacturers. Trains being added to these small villages also have a long history.

Lionel Trains date back to 1900 and were a much sought-after Christmas gift for decades, according to the company’s history. Holiday train displays revive those fond Christmas memories for many adults.