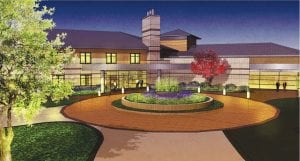 FLINT TWP. — The showroom at Art Van Furniture, 4577 Miller Rd., will be transformed into a mini “Love Boat” cruise setting, complete with special guest Ted Lange, who starred on “The Love Boat” series as Isaac, the congenial bartender.

Master of ceremonies for the evening will be Terry Crews, a noted Hollywood actor and television star, former NFL player and Flint native.

This festive evening, dubbed “Cruise for a Cause” is set to sail next Saturday, April 27, from 7-10 p.m. at Art Van, which will remove furniture from a large portion of the show room to accommodate the event.

Tickets are $100 each and available to the public with all proceeds going to support McLaren’s new Hospitality House and its “Nights of Hope” fund for cancer patients and their families who will stay at the Hospitality House during their extended course of treatment.

The facility is currently under construction at a cost of about $8 million. About half of the needed funds have been raised so far in an ongoing effort, said Laurie Prochazka, McLaren’s corporate marketing director.

McLaren hopes to raise at least $100,000 from “Cruise” ticket sales and sponsorships and currently has sold about 300 tickets, she said.

As the presenting sponsor, Art Van Furniture is generously hosting and underwriting expenses for this event, ensuring that 100 percent of proceeds benefit the cause.

Art Van has an ongoing philanthropic arm that each year selects different community groups to support, This year McLaren was fortunate to be chosen, Prochazka said.

A brief program will begin about 8 p.m. to thank sponsors and give Crews and Lange the floor for comments, Prochazka said.

Terry Crews is a graduate of Flint Southwestern Academy, He earned an Art Excellence Scholarship to attend the Interlochen Center for the Arts and then Western Michigan University where he majored in art and played o the football team, earning all-conference honors as a defensive end. He was drafted by the Los Angeles Rams in 1991 and spent six seasons in the NFL, including stints with the Rams, San Diego Chargers, Washington Redskins and Philadelphia Eagles.

He then traded in his helmet and cleats to pursue an acting career and became the ultimate family man and fitness enthusiast.

Crews has starred on shows such as “Are We There Yet?”, “Everybody Hates Chris”, and HBO’s “The Newsroom”, as well as the BET reality series “The Family Crews”.

He now stars in the “Expendables” franchise with Sylvester Stallone and Bruce Willis. He can be seen next in Netflix’s reboot of “Arrested Development” and alongside Andy Samberg in a cop comedy for FOX. He is also the spokesman for Old Spice’s award winning “Small is Power” campaign. Crews lives in Los Angeles with his wife of nearly 25 years, Rebecca. They have five children.

Lange also has an extensive resume in TV, film and stage including directing and screenwriting credits.

Tickets for “Cruise for a Cause” are available online at mclaren.org/flint or by calling the McLaren Foundation at 810- 342-2443.