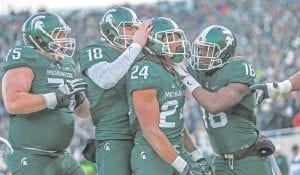 EAST LANSING – Gerald Holmes (No. 24) has established himself as one of Michigan State’s top running backs. Now a junior, the 6-foot Holmes ranked second on the team in rushing yards last season with 540 picking up 41.5 yards per game with an average of 4.9. He scored eight touchdowns, including a critical one against Ohio State. He also ranked third on the team in carrries with 110.

Holmes’ career stats show him with 125 carries for 584 yards with the eight rushing touchdowns in 16 games.

Holmes has also secured the top position at tailback on the depth chart, ahead of LJ Scott and Madre London, all three who shared time at the position last season. Holmes started the final seven games and Delton Williams and Nick Tompkins round out the depth chart at tailback.

Holmes was named co-recipient of the team’s Outstanding Underclass Back Award (offense) last season. Fans will notice a more mature, shorter haircut on Holmes this season and some will miss his shoulder length braids. He’ll definitely be another impact player for the defending Big 10 Champs. – L.P.