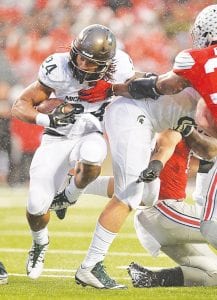 COLUMBUS, Ohio – Carman- Ainsworth grad Gerald Holmes ran in a 2-yard touchdown with 12:03 left in Michigan State’s game against Ohio State last Saturday at Ohio. Holmes’ score tied the game at 14-14 and with time expiring, kicker Michael Geiger booted in a 41-yard field goal to give MSU the 17-14 win over its arch rivals.

Holmes had 14 carries for 65 yards and the touchdown in Saturday’s game. He has 457 yards on 93 carries this season and seven touchdowns. He also has five catches for 46 yards.