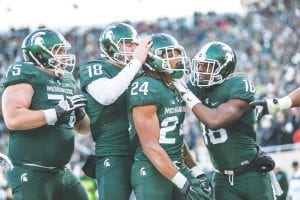 Holmes scored on a 6-yard run in the second quarter and had 12 carries for 64 yards. He also made three catches for 36 yards. Holmes averaged 5.3 yards per carry against Penn State. On the season, Holmes has 521 yards and eight touchdowns.

When asked about going to Indianapolis, Holmes said in postgame press conference, “It feels good. It’s going to be my first time playing in a championship game so I feel really good about.”

His focus has cemented him as a starter this season.

“I’ve been trying to work on smaller things and being patient and using my vision and my strength,” Holmes said about that focus. “Every play counts. I just take it play by play and everything else will work out.”

When asked about his teammates, Holmes said, “We know how to endure. I feel like that’s Spartan football. We are able to get beat down and then still stand up and fight through it. As players get hurt we have others players that can step up and make plays. Whoever is up, we give them the head nod, and they go out and make a play. It’s important to start strong but I believe we really have been able to finish strong the past couple of weeks. It’s big for the seniors. We want to go out with a big bang. The loss to Nebraska was a wake-up call. It let everyone know that we really have to come out and play. All teams are going to come out and play Michigan State hard.”