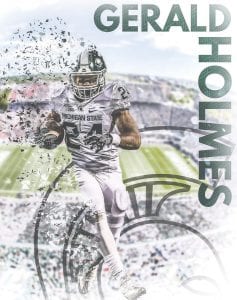 EAST LANSING – Flint native Gerald Holmes, a senior running back on the Michigan State University football team, had nine carries for 41 yards, one for loss, against Bowling Green in State’s 35-10 home opener win Saturday. Holmes also had one reception for eight yards.

Holmes, who wears No. 24, will be splitting time at running back with LJ Scott and Madre London this season. The trio have been called State’s triple threat, although quarterback Brian Lewerke had more yards than the three combined in the opener. Scott struggled as the starting running back, coughing up two key fumbles, one just shy of the goal line in the first quarter.

Holmes has also stepped up to be a vocal locker room leader this season, joining forces with co-captains Brian Allen and Chris Frey, who got the nod from coach Mark Dantanio as this year’s two captains.

Holmes was one of the Spartans that represented and spoke for the MSU players at the annual Big Ten Media Day in Chicago this year. He also returned to Atwood Stadium on Aug. 24 to support his former high school when it played Grand Blanc in the inaugural Vehicle City Classic.