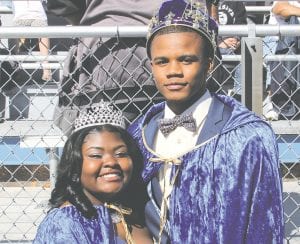 HOMECOMING KING AND QUEEN CROWNED — Ja’kavien Lewis and Brejae Gates were crowned Homecoming King and Queen during halftime festivities at the Carman- Ainsworth homecoming football game last weekend. They were chosen in voting by their peers. Ja’kavien is the son of Latoya and James Jenkins. He has been on the Varsity basketball team for 4 years, plays for A.A.U basketball 1 Nation Eliete, and is a greeter at Church of the Harvest. His future plans are to continue to have faith in God, being the best person he can be, going to college to play basketball, and fulling his dreams as a NBA player. His achievements include being a two-time first team All Saginaw Valley Basketball player, two-time Saginaw Valley League Conference MVP and holder of a 3.5 or higher grade point average throughout high school. Brejae is the daughter of Kawana Ozler and Byron Gates. She is involved in cheerleading and the African-American Students Association. Outside of school, she is involved in her church choir, tumbling classes, and Trendsetters Production modeling school. After graduation, she plans to attend Bethune Cookman University in Daytona Beach Florida to become a registered nurse then later go on to medical school to become a doctor.