Homecoming parade goes off without a hitch 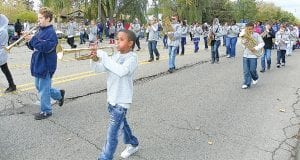 FLINT TWP. — Kylie Schneider and Jalen Walker captured the crowns for Homecoming Queen and King to cap off a chilly ride in an open convertible in the traditional Carman- Ainsworth Homecoming parade before Friday’s football game.

Temperatures hovered around 55 with brisk winds and the sun peeking in and out of the clouds but forecasted rain held off while the 45-minute parade made its way past cheering crowds lining Van Slyke and Maple roads.

Other participants included elementary scouting groups, the high school and middle school bands, float entries from the sophomore, junior and senior class and appearances by high school groups including the robotics, theater and literary clubs.

Clowns were interspersed throughout the parade, handing out candy and interacting with the crowd. 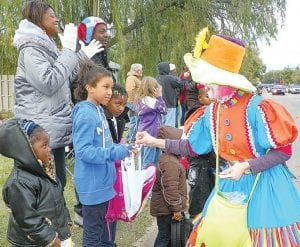 This clown was passing out candy along the Carman- Ainsworth parade route. Members of the marching band walked along in the parade.

In a class competition for the firstever Spirit Cup the senior class beat out the juniors by five points earned in a week of events including T-shirt and float design.