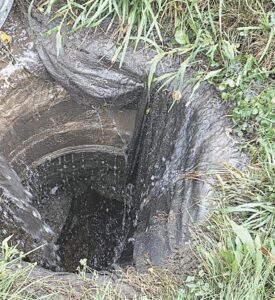 Water pouring down the storm drain in front of Porcaro’s home on Schumacher Street after one of the floods. Porcaro said the mesh seen hanging from the insides of the manhole was completely covering the opening when it flooded. Photo provided

BURTON — Resident Nicole Porcaro said she was shocked when the street in front of her house and her property flooded twice in August, causing damage to her home.

She said she was even more surprised when she found what she thinks is debris and materials left over from the city’s recent resurfacing of Saginaw Street and Schumacher Street blocking the storm drains around her home.

“I’ve owned this house for six years and I’ve never had a problem,” said Porcaro. “Not a single problem. I told the lady at the city ‘I don’t know what the road workers did, but they did something’ and she brushed me off.”

During two of the recent torrential rainfalls experienced in the area during August, Porcaro said flood waters rose from the street up onto her property and toward her house.

Frantically, she said she tried feel around under the water to find the storm drains on her street to see if they were blocked. 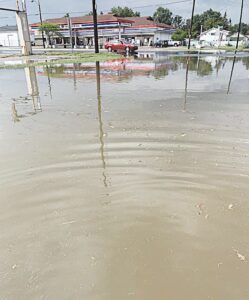 What the intersection of Saginaw Street and Schumacher Street looked like following one of the recent floods at Nicole Porcaro’s house. Photo provided

She said where she and neighbors checked the drains at the front of Schumacher Street where it meets Saginaw Street, she and neighbors found mesh covering the manholes underneath the covers and cement and debris down in the storm drains.

Days prior to the first flooding of her property in August, she said the City of Burton wrapped road work along Saginaw Street and a chip and seal coating put down on Schumacher.

During both floods, which occurred days apart, she said the water came up from the street, covering most of her property and rose up along the foundation to her home.

“It was pouring down my basement stairs like a waterfall,” said Porcaro, who document much of the flooding with photos and video. My whole yard was completely under water.”

She said she had to construct a barricade made of garbage bags filled with dirt and an inflatable raft from her pool to try and block the water from coming under her door.

The massive amount of water also caused a crack in the wall of her basement which resulted in more water pouring in, said Porcaro. 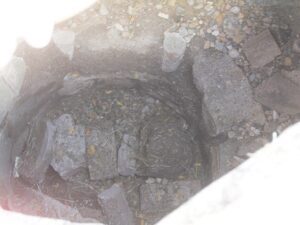 A look inside the storm drain on Saginaw Street at Schumacher Street in Burton. Inside the drain there was still chunks of concrete and debris as of Sept. 1. Photo by Gary Gould

“I don’t think I’ve cried that hard since my grandmother’s funeral,” she said.

Porcaro said she was frustrated with the city’s response because she is a single parent who pays her taxes and has never experienced a problem with her property until now.

Amber Abbey, deputy director of the Burton DPW, said after reviewing the City of Burton records regarding that manhole in relation to the Saginaw Street construction, the city nor its contractor disposed or any debris near that manhole.

“The city is aware that there was an unprecedented amount of rain and that neighborhoods spanning east and west of Saginaw from Maple to Hemphill had flooding on several streets, including streets not near the construction,” said Abbey. “Most of these drains in this area are under the jurisdiction of the Genesee County Drain Commission.”

Kevin A. Sylvester, Deputy Drain Commissioner, responded by email to the Burton View’s request for a comment regarding their findings and he said debris was blocking the drain.

“While I can’t speak to what precipitated the event, once our office was made aware of the drainage issue, we conducted a thorough investigation and discovered debris blocking the basin of the nearby drain.” He said. “Our staff removed the debris to alleviate the issue. Due to the tremendous amount of construction that has recently occurred in and around this area, we are also checking all of the catch basins in the vicinity for similar debris.”

Sylvester did not elaborate on what type of debris was blocking the basin, but chunks of concrete could be seen in the drain at Saginaw Street and photos provided by Porcaro show a black mesh that was found under the manhole covers.

Porcaro said she thinks the city should be responsible for the flooding and the damage she sustained to her home.

Abbey said since the construction was not in front of that manhole, no additional protection (fabric) was placed in the manhole during construction.