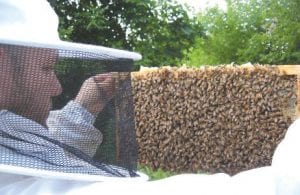 Editor’s Note: View Newspaper Group is proud to be the exclusive media sponsor of the Michigan Honey Fest for the second consecutive year. Look for us at this weekend’s event! Honey Fest this Saturday to benefit Farmer Veteran Coalition

FRANKENMUTH — For five years now the Michigan Honey Fest has made lives a little sweeter through their annual festival the funds it raises through the event.

Set for 9 a.m. to 5 p.m. this Saturday, Aug. 6 at the Harvey Kern Pavilion in Frankenmuth, the event features family-friendly fun for those with an interest in bee keeping, honey, farming, Michigan-made products and more. This year the event benefits the Farmer Veteran Coalition.

Adam Ingrao, a local member of the organization who maintains a 2-acre urban farm called Bee Wise Farms in downtown Lansing, will speak at the event.

According to their website, www.farmvetco.org the mission of the Farmer Veteran Coalition is “mobilizing veterans to feed America.” Ingrao, along with a fellow vet, founded the Michigan chapter of the organization last year. An Army vet, Ingrao began his career in agriculture after a military career-ending injury sent him into early retirement. Living with his parents and bound to a wheelchair during his recovery, his time spend in his mother’s garden was when he was most happy. He used that experience as the driving factor to enter a career in agriculture, earning his first degree at California Polytechnic State University San Luis Obispo (Cal Poly).

“I realized agricultural was more than an opportunity to be financially stable,” he said, adding that being outside working was a great boost to his mental health. Ingrao continued to pursue his new-found passion and is currently at PhD student at Michigan State University. Along with maintaining his farm, he has started a program with his wife Lacey to help combat veterans learn bee keeping. The 9-month program is free of charge.

The new program saw four students in its first year and Ingrao hopes to have 20 next year. “It’s really been quite amazing,” he said. Ultimately he said, he would like to have a 40 acre farm that is fully-equipped for the veteran program. “(My goal is to) create a farm that is an educational hub for beekeeping.”

Ingrao will speak about all of this and more at Saturday’s event. He will also make a special announcement regarding a newly-formed Thera-Bees program for homeless or recently homeless veterans to come out of a partnership between Michigan Food and Farming Systems, Be Wise Farms, Farmers Veteran Coalition and Anka Behavioral Health.

Along with Ingrao, Cybil Preston, chief apiary inspector for the Maryland Department of Agriculture, will also speak at the event. Guests will also enjoy hands-on fun, a number of vendors, a children’s area, Master Gardeners and more. Visitors will get a chance to see custom built bee hives, check out bees wax lotions, soaps and candles, join a local bee club, learn how to help honeybees and brew honey mead.

In years past the Michigan Honey Fest has helped raised funds for the Roland Warner bee keeping club in Lapeer, Aquinas college’s newly-formed beekeeping group and Chatfield School, located in Lapeer, in support of their expanded beekeeping program.

Those interested are encouraged to visit www.michiganhoneyfestival.com. Tickets to the festival are $5 for ages 14 and up and free for those younger than 14. For more information, call 810-241- 6308. For more info on Bee Wise Farms visit www.beewisefarms.com.