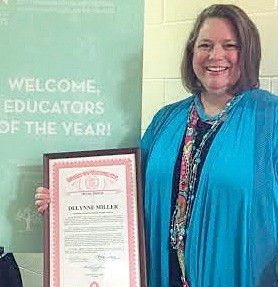 FLINT TWP. — Students and teachers at Carman-Ainsworth High School were singled out recently for special recognition outside the district.

Touchstone Award recipients are recognized as the best teachers and advocates in arts education (creative writing, dance, media arts, music, theatre and visual arts) who have a record of advocacy for arts programs, dedication to bringing out the very best in their students, and a continued commitment to artistic excellence. Earlier this year, META also named Miller the Michigan Teacher of the Year.

On May 6, at the GISD Career and Technical Education Student Awards Banquet – Best of the Best 2015, CAHS senior Skyler Shippy received recognition for Drafting/Design Technology.

“Skyler has talent, respect and is very driven,” said Gerald Demick, his instructor who nominated him. “He has worked with the Detroit Model Railroad Club. Skyler is an outstanding student and is always helpful.”

Skyler was also named Student of the Month in October 2014 at the Genesee Valley Rotary Luncheon for student recognition.

Jessica is team captain and two-time Most Valuable Player for the C-A volleyball team. She played varsity volleyball and softball for all four years of high school. She receive

All Big Nine Honorable Mention her freshman year in volleyball; was First Team All-League for her remaining three years playing volleyball and earned All-Region honors as a sophomore and junior. She was named to the All- Academic Volleyball Team for the last three seasons of her career. During her time as a Cavalier, Jessica played in 453 volleyball games.

Milik Dawkins made the Honor Roll all four years off high school and is part of the Big 9 All-Academic Teams, Saginaw Valley All-Academic Team, and the Michigan High School All-Academic Team for wrestling and football. Milik took numerous Advance Placement classes while playing football and wrestling for CAHS. He has been a four-year varsity athlete in both sports and has maintained a 3.86 GPA. Milik was named to the “Michigan Dream Team” and was a NHSCA All-American, and two-time National Champion in wrestling. This past season Milik was the runner- up in the MHSAA finals in the 160 lb. weight class. This past February, he was recognized as the Kiwanis Male-Athlete of the month for his accomplishments in athletics and in the classroom. Aside from being a scholar-athlete, Milik has also enjoyed spending time as a volunteer at Mt. Moriah Church serving as a youth director. He has also volunteered as a coach and mentor to kids through the Big brothers and Big Sisters organization of Flint as well as a number of other volunteer activities.

Jones is in his seventeenth year of teaching at Carman-Ainsworth For the past ten years, he has held the position of Director of Instrumental Music in charge of the Symphony Band, Concert Band, Freshmen Band, Orchestra, Percussion Ensemble, Brass Ensemble and the Blue Brigade Marching Band. During his first seven years, he taught 5th & 6th Grade Band and served as the Assistant High School Director. The Carman-Ainsworth High School ensembles consistently perform well at Michigan School Band and Orchestra Association Festivals. Students in the program participate in District and State Solo and Ensemble Festivals and several have been selected to participate in various Honors Ensembles throughout the state. The Blue Brigade Marching Band has been a Michigan Competing Band Association State Finalist four of the past five years.

Jones is an active member of the MSBOA District III Executive Board where he serves as Vice-President for Band and Orchestra Festival.